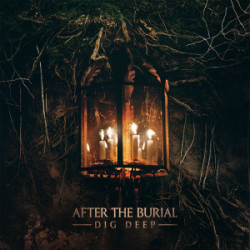 After The Burial – Dig Deep

Often it is said that in the wake of chaos and tragedy that one can become stronger and better. This is the test that was facing Minneapolis’ After the Burial with the tragic loss of guitarist and founding member Justin Lowe in 2015. The band was faced with tough choices about continuing together, forming new bands or just hanging things up entirely. Fortunately for you and I, After the Burial has coped with their loss and have decided to push on and the result is a very strong album and one that will truly be enjoyed. Its packed with aggression, technical riffs and crushing percussion that take you on a wild ride for 9 straight tracks.

Dig Deep is a great testament to the band pulling back together and doing what they love doing the most, as well as a dedication to their lost band member and friend.  In a recent statement guitarist Trent Hafdahl was quoted “When you think you don’t have anything left in you, you have to rely on that inner strength,” continues Trent. “That’s where we are as a band. So many things beyond our control went wrong, but we started to dig deep as brothers.”

The album opens up with a kick to the face intro on Collapse and never looks back. Collapse sets the tone for the rest of album as we are treated to a little bit of everything the band has to offer, stomping drum patterns, shredding guitars, intense vocal screams and growls. This was one of my favorite tracks off the album.  Other highlights were Lost in the Static, which was also the first single off the album. Most fans have already heard the track so I don’t have to go into detail on it, the video can be seen below.

Another standout track for me was Laurentain Ghosts. This one stood out because of the mellow guitar intro and the emotion that seems to flow throughout the song. Then I read more into the meaning and saw that the Laurential Divide is a actual place in Minnesota where the water turns and flows a different way. This made sense as far as the sound of the song itself but also in terms of the band having to go a different way now. Overall a very powerful track.

The album ends with 2 of the more technical guitar tracks on the album, The Endless March & Sway the Break. Both of which make my fingers hurt just imagining them being played. Those guitar riffs though added a new level and really take not just these tracks but whole album to new heights. I look forward to seeing tracks like these when I see them live on their upcoming tour.

Dig Deep was a very enjoyable album and a great sign that even in the darkest times we are capable of still pulling together and coming back stronger than ever.It has something for everyone whether you are a fan of metalcore, hardcore or progressive metal. This album packs all of that into  9 tracks that flow seamlessly together. There were times I made it through several plays of this album without having to stop, its very easy for this album to pull you in and not let go!

After the Burial is:

- Previous article « Feed Her to the Sharks