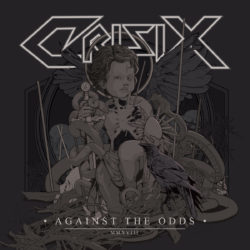 Today I received a seriously interesting album to review from this Barcelona born thrash band CRISIX, who I must admittedly say I’ve never heard before, which is odd considering I am a thrash guy, and the thrash guy at Loud & Heavy. That said, I was a bit thrown back and I’ll get into why shortly, but the album opens and really takes you into an all out guitar assault, which isn’t uncommon from most thrash albums. But what took me back a little bit was the vocals, which took me a few tracks to really get into just out of personal taste because the vocals seem to have a resemblance to that of the early 2000’s version of bands like Norma Jean, etc..

But as I got more into the album I really found myself finding some nice cross overs with the 2000’s hardcore scene with tracks like “Perseverance” which take a slower, yet still trashy approach to the album. Then it gets right into “Xenomorph Blood” that basically rips your head off and is extremely traditional thrash, with a feeling like you’re listening to that dark fast tone of Exodus, a really a good time.

Musically, I think the album really does a nice job of throwing us back into the 80’s bay area thrash scene and upping the game a bit in an extremely crowded thrash genre right now. I am for one, very happy to have run across this band and am looking forward to future releases and see how the band progresses and really shows us that they aren’t just an average thrash band that can play very fast, but also show us how melodic they can be as they show in tracks such as “Prince of Saiyans.”

So that, CRISIX, I say, go forth, continue to kill it and good luck out there!