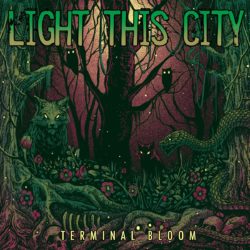 Light This City have returned with an absolute punch to the gut. One of the most underrated Bay area thrash bands of the last decade and a half have again released an album that is brutally bludgeoning from start to finish.

It would do me no good to go track by track because every song is completely unique in their own way, but eerily reminiscent of early Testament/Legacy but with a much darker sound similar to that of the newer black thrash movement with bands like Skeletonwitch and Black Fast. The difference being that those bands have been able to garner a good amount of attention and relentless touring, while Light This City, possibly one of the pioneers in Black Thrash sit back in San Francisco and I wonder, where is their love!?

I think it’s safe to say these many years later that Laura’s vocals have really progressed in a very very nice way and it seems as if the band has possibly created what could be their pinnacle album. I dare you to try them out for size, can you hang!?

I for one am so glad to see them back at it again and look forward to seeing them on their upcoming west coast tour!

If you aren’t aware of this band, do yourself a favor and check them out.