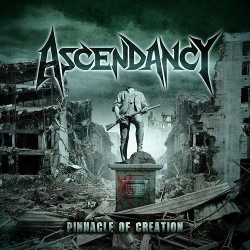 Ascendancy – Pinnacle Of Creation
Let Us Know Your Rating

I have had the pleasure of seeing the high-energy, Redondo Beach locals a couple of times, and was enthusiastic about reviewing their first full-length album.
The album cover provides an immediate juxtaposition to the title, as what resembles the modern and historical monuments of American power are demolished.  When compared to the song titles, it is evident a government maintained supremacy over its citizens, a revolution attempted to turn over said tyranny, and yet after the war, the ironhanded system remained.

Pinnacle of Creation opens with a strong down-tuned lead, to which the drums break into a blast beat-double bass aggression almost identical to Slayer’s “Raining Blood.”  The bass accompanies the onrush to layer the clean rhythm of the guitar.  Gus joins in the melee with his decent range of what I call “Biker Metal vocals” and death metal growling.  The attitude of the album is quickly created.

The guitar hooks continue to remain strong throughout the album, and the warriors certainly worked hard at interlacing complimentary modes for the listener to be overthrown by complex phrasing.

Brodee works hard to compliment each instrument.  However, although in songs like “Relentless,” “Uprising,” and “Power Imprisons Us All,” there is a distinct expansion on timing, which the remainder of the album doesn’t seem to have the same elaboration or drum fills as to what potentially could color the attitude of the album.

Jimmy also seems to be over-powered by the hook-laden guitars, but potentially purposeful in not overpowering Gus’ vocals.  I was excited to hear the carrying riff in the opening of, “Pitch Black,” not to mention, “Power Imprisons Us All,” as well as a definite backing fury to guitar solo development.  “Eyes of the Tyrant,” the final song of the album was when Jimmy could finally showcase his careful, but blazing virtuoso talents.

My favorite track on the album would have to be, “Force to be Reckoned With.”  I believe all of the best elements of the warriors, inclusive of an acoustic intro harmonizing into minor mode on guitar, accompanied by Gus’ monstrous vocals was absolutely refreshing.  I have only one wish for this song:  That there was slightly more development on the guitar solo!

In finality, I’d like to say the influences for the musicians are quite clear, and if you are a fan of Pantera, Slayer, or Trivium, then you will enjoy this album.  Being this is Ascendancy’s first full length, this is a powerful start to their career, and I hope they continue to push their own boundaries.  The warriors have solid composition but I feel it still requires more experimentation on the equation of their song structure/forms.  The passion is obvious, and so is the aggression, but what seemed to be missing was the concrete connection of the lyrics to the composition.  The lyrics I was able to identify were true to the emotions of the album, but as generally a new fan, would have preferred they accompany the albums’ digipak.