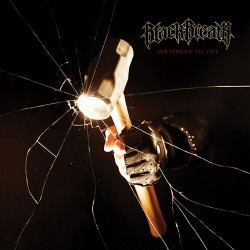 Black Breath – Sentenced to Life
Let Us Know Your Rating

One way to grab an audience that may or may not have ever heard you before is to first release a single like Sentenced to Life, an ear grabber for the ages. Although this band hails from Seattle, WA, when I first popped in the new album Sentenced to Life, I heard the first track, Feast of the Damned, and was instantly taken back to the hey day of New York hardcore.

Then I decided to let the album roam on, and of course next was ‘Sentenced To Life’, which was what initially grabbed me on Satellite radio, and was what I like to call a fun ride through the great Bay Area Thrash scene of the early 1980’s.

On to ‘Forced Into Possession’, and ‘Home of the Grave’, and felt like I had just let Crowbar, Madball, and Exodus have a baby. The vocals matches so well with guitar riffs that reminded me that bands DO IN FACT know how to solo still, made ‘Home of the Grave’ one of my favorite tracks on this album.

Then all of a sudden I’m taken aback to a time once upon a time when the bass guitar was so prevalent in American metal it almost made you sick. ‘Endless Corpse’, took us through a journey of silhouettes and sudden blast beats, followed by eerie guitar riffs that are almost mesmerizing.

I believe an emphatic scream of guitar riffs with pounding blast beats is in order on ‘Mother Abyss’ after our journey in the only slower song on the album. Mother Abyss is not for the faint of heart, but definitely one for those that enjoy pounding their heads to a different beat.

Of Flesh, the next track on our list took me into a deep slumber such as Black Sabbath did, and yes I mentioned them in the same breath as Black Sabbath because this song has a way of bringing out the Tony Iommi and Geezer Butler fanatic in me. Good, Fast, melodic, aggressive track.

Doomed and The Flame once again bring the hardcore attitude back out in this band, showing us why they are plenty capable on any lineup on any tour.

The track Obey “Had me at Hello,” with a drum beat that brings me back to Indians (See Anthrax), and howling screams that echo behind a fill of heavy guitar riffs.

This album is not for the faint of heart, but is truly for those that want to get in their car and turn the volume up to 25 and bang their heads till your neck is sore.

Next article - Shadows Fall – Fire From The Sky »