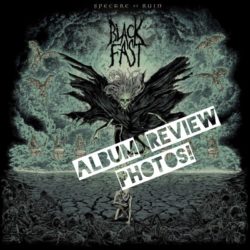 What can I say that hasn’t already been said over the last few weeks about this album? I’ll give it a try.

Black Fast has continuously impressed album after album, but this album has something else. An undeniable brutally fast black thrash attack that incinerates your ears track after track.

Live, Black Fast absolutely shreds and is really doing something that not many other bands are doing nearly as well as them. This album is a true testament to a modern band not falling for the “you could be a lot bigger if you change your style to this…l problem that’s been happening the last few years. In fact, it feels like this album got heavier and faster while still keeping in line with their melodic style that is so reminiscent of early At The Gates meshed with the 90’s speed metal scene.

I believe this album is the closest thing to perfect that fans of this much not respected genre have waited for. Sink your teeth in and go see them live!

- Previous article « My Night Out With Dimebag Darrell and Vinnie Paul