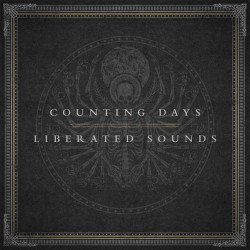 Roaring out of the UK is metalcore quintet, Counting Days. Their debut album Liberated Sounds comes out of the gates swinging and swinging hard! This album is relentless, its raw, its aggressive, it is really all that you look for in a metal album. The band used producer Fredrik Nordstrom, who has worked with bands like At the Gates, Arch Enemy, In Flames and more, and its pays off well.

Opening track Burned By Faith kicks things off with a brutal roar and shredding guitar and continues through what might be the most powerful track on this album. This track I’m certain will crush in a live performance. Other personal favorite tracks include Die Alone, Fire From the Sky, and Sands of Time (which features guest vocals from Tomas Lindberg of At The Gates)

Counting Days provides a refreshing breath of life out of the UK metal scene and this album sets them as a force to be reckoned with. I for one look forward to seeing bands like this live, as that’s where a lot of their energy is really shown. And if its anything like what is showcased on this album we are in for one great show!