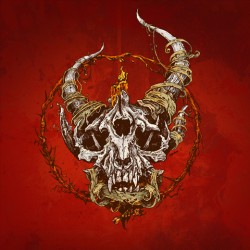 After hearing past albums from this band, I have to admit that I was slightly reluctant to plug this one into my ears because they’ve had the ability in the past to lose me a few tracks in. But this album, from start to finish, is one of the more impressive metal albums I’ve had the pleasure of hearing recently. No matter your beliefs, it is an impressive album that you can quickly get sucked into.

The album opens with Crucifix, a full strength blow to your ears track with insanely heavy guitar riffs and clear screams and growls that remind you how great screaming can be when it’s not raspy and over-done. From there it gets more melodic, and charismatic leading into God Forsaken and My Destiny, which are reminscent of old school Swedish thrashers such as At The Gates, In Flames and Soilwork.

What was most impressive about this album is after they know they’ve got you hooked with the heavier tracks, they are able to lead into songs such as Wake and the ballad Tomorrow Never Comes, which we all of a sudden get to hear an almost sweet, yet energetic side of the band. While also remaining to stay just heavy enough to keep us interested.

Someone to Hate is currently all over Satellite radio, but I feel does not truly represent this bands ability and talent. I think this is such a great “middle of the road” track because, yes, they were able to bring you in with it, but once you’re in, you can see why they’ve been able to gain so much strength and popularity in the metal community.

One of my favorite bands that doesn’t get much love is Mnemic, a band that is able to mold strong melodic, progressive metal with electronic beats and noises hiding in the background similar to that of Fear Factory. Demon Hunter is also able to pull it off as it leads into This I Know and Means to an End that are very strong pieces that include killer screams, clean vocals, and the best part-minimal double bass. What a lot of people fail to realize is that heavy double bass tracks can sometime mask the other sounds and abilities of the other people in the band. This band does a terrific job of bringing the guitars out in a screaming fashion right when they’re needed. Not over-doing, and not masking anyone else’s talents.

From there, songs like Resistance, and Dead Flowers bring out the softer side of the band, while also showing us that the aggressive nature of them is only a part of what they can offer.

The album is rounded off by What is Left and I Am A Stone, which help bring us back up with intense vocals and piercing guitar riffs, while also bringing us back down to Earth.

It’s a roller coaster ride of ups and downs throughout, but also one of the most mind-blowingly good metal albums that have come out in recent months.