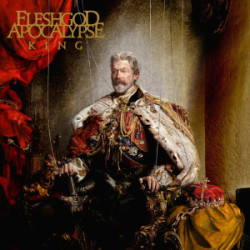 I was first introduced to Italian symphonic death metallers Fleshgod Apocalypse about 5 years ago when they came through town as part of the Summer Slaughter Tour. At the time I had absolutely no idea who they were but their stage presence and brutal metal attack hooked me instantly. Rarely have I heard a band with such a dynamic sound be so in tune with one another and absolutely crush in a live setting. I knew then as I do now, this band was going to be HUGE.

Fast forward to today, as the band is set to release their 4th full length album titled King. Keeping with the concept album theme we have seen most of their releases build around, King tells us a tale of a world that is coming to an end. It tells us a tale of the king who is fighting to keep the good in the world as it is falling apart around him. This album plays out like a great theatrical act and is best experienced as a whole. I recommend sitting down and throwing this album on and taking the near hour journey through this tale and really experience the different dynamics presented throughout.

Personal highlights on this album would have to be Healing Through War which kicks off with a galloping rhythm which stomps relentlessly throughout, paired with dare i call it a beautiful solo that comes ripping in shortly after the 3 minute mark. This track with its many layers going on feels massive. Paramour (Die Leidenschaft Bringt Leiden) was a track that caught me off-guard but was a pleasant surprise that serves as our intermission, so to speak, on this epic journey. On its own it wont be a track that many seek out but as i stated earlier if you can listen to this as a full piece of work it fits in perfectly. And don’t let the peacefulness of the track fool you, Fleshgod rips right back into the second half of this act and is determined to kick ass! From the second half,I’d have to say the track A Million Deaths is the one that stood out the most. This is a track that really captures most of what Fleshgod Apocalypse is, the perfect pairing of aggression and harmony. It amazes me just how wonderfully this band has melded to seemingly different styles of music into one monstrous work of art.

King is by far the most complete and dynamic album that Fleshgod Apocalypse has crafted,I absolutely enjoyed every minute of this journey I was taken on. This album is certainly setting the bar high for everyone else in not just the death metal genre, but in metal as a whole. Stakes are also raised from a story telling standpoint, this is how a concept album is done! The way the band works with the symphonic elements really helps carry the mood and emotions of the music. This album could easily be played out on a full drama stage, which I’ll certainly cross my fingers for. If you are a fan of symphonic metal, death metal or just great story telling in your music, then this album is for you! So pick this album up, hit play and enjoy the masterpiece that is King.