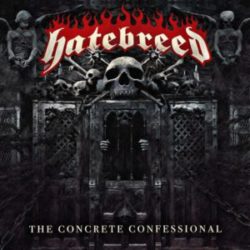 There is the old saying “If it ain’t broke, don’t fix it”. This is a motto that Hatebreed have thrived by, with each album release packing a familiar punch but with a slightly new twist. Hatebreed has been one of the most consistent bands in the metal / hardcore scene, and in no way is that a bad thing. Their newest release, The Concrete Confessional, is everything we have grown to love from the band with a few new tricks up its sleeve. Its fast, short, aggressive, inspirational and catchy as ever.

The Concrete Confessional is possibly the farthest the band has swayed from their traditional sound to date.  There’s the track Something’s Off that seem to be a mesh with the more rock-based sound found on front-man Jamey Jasta’s solo project, Jasta. Featuring more singing and harmony then we typically see Hatebreed crank out. The Apex Within has a very old school NY hardcore feel filled with gang vocals and plenty of Whoas. It’s these new bits that are a breath of fresh air and I feel are actually a highlight on the album.  Fear not Hatebreed fans the rest of the album is packed full of the aggressive tunes like Dissonance and Serve Your Masters we’ve grown to love from the band. Led by the single / video Looking Down The Barrel of Today, which is a insanely catchy and adrenaline pumping song from start to finish.

When a band gets this far along into their discography it becomes a bit harder to really place new albums amongst the greats. Is The Concrete Confessional the best album in the Hatebreed catalog? I wouldn’t go that far but I felt it was a nice step up from the last album and is packed full of songs that can pick plugged and played into their live sets and have the crowds moshing and singing along. I felt this album was a good attempt at adding new ideas into the mix without compromising the bands core sounds. With yet another solid album under their belt Hatebreed shows us why they are one of the top bands in metal today.

Next article - Pierce The Veil – Misadventures »