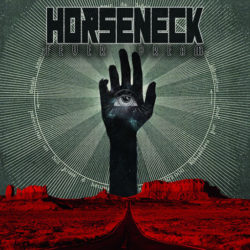 First off, this new album from Horseneck should be looked at much different from their other albums, it stands alone on it’s own. I won’t begin to guess where the influences came from or where their heads were at during the writing process but this album is start to finish one of the more complete albums I’ve been able to jam through several times. It’s a careful balance between sludgy doom and beautiful melody that pulls you in through the melody and spits you out hot through the sludge and doom.

Opening with “Barbra Streisand” is a bold move, but it really has the grooves that pull you in from second one and keep you there throughout, reminiscent of Mastodon when they turned the corner to more “rock”-y tunes. And then straight into “Pen15” which is heavy and fast, but groovy as hell.

After that it gets into “Happily Level Lafter” which slows it down again, but way more sludgy doom and onward, the rest of the album is very contrasted track to track, which for me, is a huge feat because I don’t find myself skipping any tracks. I can jam through all of them and find something different in each song, while still being interested. Whether it’s the groovy doom tracks, the screams here and there, or the melodic singing that actually pushes most of it forward allowing for songs to breathe.

This is by far one of my favorite albums I’ve heard thus far in 2020, and for most of 2019 because it feels like the band put some actual heartfelt thought into how they were going to record this and what they wanted it to sound like. You can tell as you go through it that they didn’t want to fall to the way side in Spotify, and while music is and should be fun to listen to, play and record, it’s also a business, and they are taking the business very seriously in 2020 it seems. I look forward to seeing where this album takes Horseneck in 2020, and have high hopes that songs like “Red Curtain” aren’t overlooked.

Light some candles, strike up a joint and jam Horseneck’s Fever Dream and get a full musical experience to your ears.