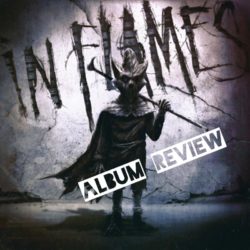 In Flames – I, The Mask
Let Us Know Your Rating

If there’s a moment in time that I could freeze and think back to with a much larger magnifying glass, it would be one of the most influential concerts I’ve ever been to. Sometime in the early 2000’s In Flames headlined a tour with Soilwork, Chimaira and Unearth and solidified In Flames as my favorite metal band of all time. They are so incredibly eclectic and do what they want, how they want at all times, which is by far one of the greatest things any artist can do because it makes them very easily pivotable and in this case is helped In Flames to grow their fan base while simultaneously not alienating their long time fans.

That said, I can unequivocally say that I have liked every In Flames album ever made, but I did find it difficult to jam the last two over and over again.

This album, “I, The Mask” is a new In Flames. It is not old In Flames, but it is also not the In Flames we’ve heard the last two albums, this is an In Flames that may or may not have heard the calls from the old fans for a heavier album, but what I know for a damn fact is that it sounds wholly like the Gothenburg sound I’ve come to love over the years. Them, Soilwork, The Haunted and Dark Tranquility have all returned this past year with albums that feel like themselves again, that feel like the beautiful, melodic Gothenburg Swedish sound that defined an entire generation, nay an entire musical movement.

The album opens with “Voices”, and a big part of me instantly was taken back to 2002’s Reroute To Remain, it brings the absolute ferocity of In Flames and what they stood for for so long. It’s Anders bringing his signature scream back to life along with a lyrical beauty that is clearly here to remind us that they can do anything and they can make you smile and want to mosh your heart out singing each and every lyric out of your lunges as loudly as possible. Then into the early single “I, The Mask”, which is probably one of the more forgettable songs (which is odd to say because this album is absolutely amazing from top to bottom), and into “Call My Name”, another early single “I Am Above” and then into a track (my favorite track) of “Follow Me” which echo’s of the past so loudly that it almost makes me weep remembering the first time that Anders voice and lyrics touched my soul in the mid 90’s.

From there the album rips through so quickly that by the time you reach the end, you absolutely need to re-start it, or put it on loop, or do whatever it is you feel you should be doing with it to continue listening, but make no mistake that while some are saying  “In Flames is back!” I’m screaming from a mountain top that they never left, they just needed to be artistic and be true to themselves which brought us directly to this album that feels somehow more personal than anything I’ve ever heard from them. Whatever you do, don’t say “I didn’t like their last two albums so I’m not listening to this one” because you would be doing yourself a massive disservice to yourself and to the respect owed to In Flames – who continues to wave the Gothenburg sound flag as high as possible.

….More to come in two weeks!

- Previous article « Aftershock Festival Upgrades to 3 days and tickets are on sale!