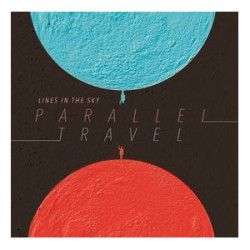 Lines In The Sky – Parallel Travel

Before I ever even knew the music of Rush, I wasn’t a fan. It was no fault of their own. I place the blame on a college roommate that spent our entire freshman year learning how to play guitar to “Tom Sawyer.” What started as sloppy chord work in the fall became a choppy, high-pitched cover by the end of spring. While his improvement was impressive, it was a terrible introduction to a band highly regarded for their musicianship.

Needless to say, when I read that one of Lines In The Sky’s common comparisons was to the Canadian progressive rock legends, I was a bit reluctant to review their upcoming album. Having never previously heard the Nashville trio, the last thing I wanted was to go into the review haunted by bad dorm rock nearly 20 years ago. Luckily, while there is a resemblance in parts to Geddy Lee and company, LITS’ sound spans far beyond one singular artist.

Comprised of brothers Jesse and Bowman Brock, on vocals and drums, respectively, and friend Max Ingersoll on bass, it’s immediately clear that Lines In The Sky is talented well beyond its musicians’ youth. And though they come from the home of the Grand Old Opry and Ms. Rayna Jaymes herself (Google it), country appears to be the one genre absent from their repertoire. In Parallel Travel, their second full-length LP, LITS teeters between hard rock, alternative, pop and progressive rock like Philippe Petit crossing the Twin Towers on a wire. From song to song there are nods to past and present artists, while LITS fights to carve out their own unique sound. It may be this duality of embracing their influences while seeking to define themselves that inspired the album name.

Parallel Travel opens with “History,” a solemn, quiet tune unlike any of its nine counterparts. In the vein of intros to albums like U2’s Joshua Tree, Kings of Leon’s Only By The Night, or Coldplay’s Parachutes, it feels like a tease of things to come. Bare of LITS’ trademark guitar shredding and frantic percussions, “History” is a small peek to the sonic compilation that follows.

From there the album ventures down two paths —subtly different, yet defining of who the young trio is as musicians. Songs like “Nereus” and “Admiral” are likable and clean. The vocals, strings and beats are crisp, clear and neatly arranged. It’s in these songs that fans of Rush will find a home. While these tunes impress by displaying LITS’s melodic mobility and keen producing skills, the life of the album is fully realized in the tracks that harness a raw, kinetic energy. Highlighted by “Threads,” “Element 115” and the album’s title track, “Parallel Travel,” Jesse Brock’s vocals take on a greater sense of urgency and lead LITS out of their inspiration’s shadows into their own place in the rock landscape.

One of the greatest challenges of young bands is their ability to find their own place in the market — not just commercially, but sonically. Are they able to take the music that has inspired them to create something new or does their sound become a generic blend of influences? At the outset of Parallel Travel, it’s unclear if LITS’ can shake the comparisons; there is a heavy aura of Rush and modern rockers Muse and Coheed and Cambria. And while Parallel would be a more-than-suitable nod to LITS’ idols if it continued down that path, it’s when the band diverge from that course to a freer, more organic sound that the album shines. If their journey of growth and discovery continues to evolve, maybe in 20 more years there will be a student with many sleepless nights haunted by a roommate’s amateur attempt at trying to learn guitar to a LITS’ gem off Parallel Travel.