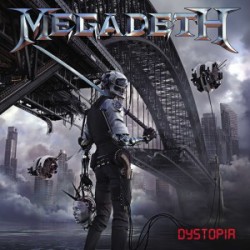 I’m the thrash guy here at Loud & Heavy, I’m the guy that’s supposed to tell you if I love or hate a record. Well if somebody were to have told me a year ago that the new Megadeth album would make me believe that Dave Mustaine has returned to form and remind us why we all love this legendary thrash band I would have laughed them out of my way. And I would have been dead wrong.

The addition of Chris Adler (Lamb of God) on drums feels like a much-needed refresher for Mustaine after the debacle that was “Supercollider.”
Whether you love or hate or are indifferent to post 90’s Megadeth I’m here to tell you that Dystopia has everything you’d expect from a Megadeth album, punishing guitar riffs that absolutely rip open your ear drums, with Mustaine’s signature political style lyrics, but mixed with Adler’s drums you can feel this album come through like not many ‘Deth albums have done in recent years.

It is reminiscent to me of a mix of Peace Sells and Thirteen; Thirteen being an incredibly under-rated album from them. One you get through ‘The Threat Is Real’, ‘Dystopia’, ‘Fatal Illusion’ and ‘Death From Within’, which keep your head bobbing and uneasy the entire time beating your hand on a table you are served up a few hard rock ballads of ‘Bullet to the Brain’ and ‘Post American World’. This is the part of the album that loses me, I don’t feel that it stands up to the beginning or end of the album.

‘Poisonous Shadows’ and ‘Conquer or Die’ are specifically reminiscent of Peace Sells and other early Megadeth, absolute pure gems hidden on the back-end of this album. Come on Mustaine, front load this bad boy! Then followed up with ‘Lying in State’, ‘The Emporer’ and ‘Foreign Policy’ which has this old school traditional thrash sound and feel with up tempo drums and guitars, just lacking some gang vocals when Mustaine screams out “FOREIGN POLICY!”

I have to say that this album really shows us all that Megadeth has not lost their way, and is staying true to what they do best giving the fans punishing, screaming guitars and drums that are nothing short of impressive. And unlike Metallica’s attempts to stay true to thrash and fall very short Megadeth’s ‘Dystopia’ is a rip-roaring political thrash-fest and absolute return to form for the juggernaut that is Megadeth! I for one am one happy Mega fan!