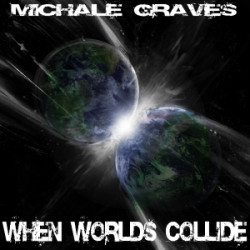 He’s wandered and drifted many miles, even losing a skeleton along they way. This monster-rock misfit has found his way to us yet again, bringing one of his finest solo works to date. When Worlds Collide brings a little bit of everything Michale Graves has to offer. Everything from upbeat rock tunes to slower more melodic ones, this album picks right up where he left off with his last rock album, Lost Skeleton Returns.

The main focus of course going into this album was how would Michale Graves deliver on his attempt to make a “sequel” to one of his most infamous tracks, Saturday Night. It’s definitely the thing that piqued my interest the most before getting my hands on the album. And while it definitely doesn’t disappoint, it’s the other original pieces on this album that really shine through. This album is packed full of songs that should have no problem fitting into an already hit packed setlist.

Bedlam, the opening track on the album, kicks things off with a high tempo that has the feel of his Misfit / early solo album days. This song is a great opener for the album and possibly even the live sets. It opens the doors for a personal favorite on the album, Diabolical. While not quite on the same tempo level as the first track, this tracks is carried more by the great song writing capabilities and voice of Michale Graves. Speaking of which, for making music for close to two decades his voice feels like it grows stronger with each passing release.

At this early portion of the album we find ourselves at the point we all came to see. Dying on Sunday Morning carries some similarities to the original piece that initially appeared on the 1999 release from the Misfits titled Famous Monsters. Undoubtedly it was one of Graves’ signature songs, and he pays fair respect to it with this companion piece. I wont go into much detail on it, it’s definitely something you need to experience. I will say that composing a new companion pieces to one of his most popular songs was no small task but Dying on Sunday Morning turned out to be very enjoyable and capable of standing on its own.

Other highlights of When Worlds Collide would be I Walk with a Zombie which again revives that good old punk anthem feel. Its chorus will get stuck in your head, this is a guarantee! Robot Monster has that Saturday night monster matinée groove to it, it’s a slower borderline Sabbath style jam. A nice blend of both the older horror themed songs mashed with the more structured style rock we’ve seen on some of Graves’ recent releases. Personal favorite track on the album would have to be The Face Behind the Mask. Again we see a slower crawling guitar riff paired with great vocals. This song instantly hooked me the first play through and is a track i am constantly pulling back up to play.

When Worlds Collide showcases that even after nearly two decades Michale Graves can still kick our ass with his brand of monster rock. It’s a Frankenstein creation taking one part punk rock reminiscent of his Misfit days, one part horror movie and two parts of creative song writing seen on recent releases. The end monster is an album that while short and sweet, is an enjoyable experience from start to finish. Each of the 11 tracks offers up its own little story for you to dive into. It’s a fine next chapter in the ever evolving and expanding book of Michale Graves.