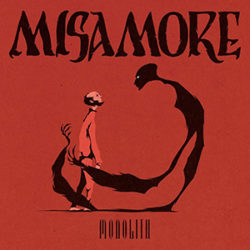 Emerging out of the Sacramento, CA local music scene is hard rocking trio Misamore, with their new full length album Monolith.  Building off their strong debut album, Horizon, band members Josh, Mike and Ryan all bring their wide-ranging musical influences together to form one of the most solid entries into the hard rock genre this year. Crediting bands such as 311 to Metallica to  even some dark extreme metal acts, this album really has a little something for everyone.

Personally some of the standout tracks would be Choose which opens with a monster bass line that rumbles out of the gate. Paired with driving drums and front man Josh’s vocals it has a tone similar to early Breaking Benjamin. It’s extremely catchy has just enough punch to pull in the metalhead in me. There are a lot of elements at work here and it works very well. Another one that really jumps out at me is the pairing of instrumental track Dark Room and Long way Through. The mood for this track(s) is set up perfectly by its eerie guitar intro. The main part of the track, Long Way Through, has a grungy slow crawl to it. I couldn’t help but be drawn into this track, it felt so different from the rest but yet so fitting. If I had to pick, this would be my top track off of Monolith. Misamore saves a pair of monster tracks in Monolith and Nine Eyes to close out the album. The track Monolith has a slow build to it, with a groove that’ll have your head banging along the whole time. Whereas Nine Eyes is probably the most metal track on the album. It has the screams, the blasts of double bass and chugging guitars and bass that we all love.

Sacramento has been quite the scene as of late for hard rock / metal bands, so standing out can be quite the challenge. Misamore definitely has a sound that should appeal in the local circuit and with a little touring that door should really open for them. Monolith is a top to bottom solid body of work that shows off the bands dynamic and their ability to play a style of music that really fits them. If you are in the Northern California area definitely keep and eye and ear open for these guys, you wont regret it!