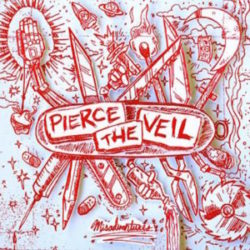 Pierce the Veil’s 4th album has been something talked about in hush and worried tones for quite some time now, but fear not, Misadventures is worth every second of the wait.

Kicking off and demanding you Dive In, Misadventures sinks its teeth into you and is unrelenting and merciless.  “And modern anxiety / That motherfucker never rests / Our adrenaline is kickin’ in so play the beat faster” Writing and rewriting the album all across the country, Vic Fuentes took his time pouring emotion into every song, this album feels more personal than ever.  The songs feel more like a conversation you’re having, it’s easy to place yourself in the narrative by the end of each song.

Slowing it down for Floral & Fading, written for Vic’s girlfriend who was dealing with rude and threatening fans, telling us that nothing else matters but the one you want to be with.  “So now we’re gonna chase the moon like fire / Yeah, together we can fake our own deaths here / Just wanna be alone and watch as you all disappear” Circles another emotional song, written after the attack at the Bataclan, Vic wrote the song as if he were at the show and what would have happened “Save yourself, don’t ever look back / Nowhere to go and so we both spin around in circles”

Taking the slow and grow route was clearly the wise choice for Pierce the Veil.  While Misadventures sounds very much like PTV it also sounds new, like PTV 2.0 and much like their fan base, PTV has grown up.  Sounding more mature and yet still giving you feelings the nostalgia of youth, putting you back in the car with your friends in summertime. “All we have are parking lots and nowhere to go” But be warned “don’t believe in never-ending summer / ‘Cuz they don’t exist”

As the album reaches the final track Song for Isabelle you’re already hitting repeat, Misadventures begs to be played again and again and again.  While the album title speaks to the fact that the process didn’t go exactly according to plan, it is pure perfection pieced together meticulously and it absolutely shows.  With each listen through you hear something new to love and move you.  It’s impossible to sit still during any single song and if you don’t cry at least once you’re a liar.  My money’s on Gold Ribbon Medal being the one to tug at your heartstrings, if Circles didn’t that is.

Pierce The Veil is: