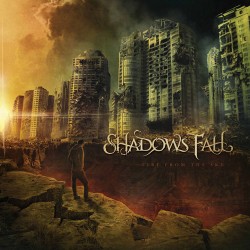 Shadows Fall – Fire From The Sky

Shadows Fall – Fire From The Sky
Let Us Know Your Rating

I’m here to tell you a story, a story of a band that constantly defies the odds, a band that continuously defends their metal honor. And a story about an album that is so impressive, you can’t help but crank it up wherever you might be. No matter what kind of metal fan you are, where you live, or what you do for a living, this, yes THIS is the album you’ve been waiting for!

The Unknown is the first track on this amazing album, and I’m not completely sure you could have eased into this album with any other track because as you move on, you realize this entire album is so driving and forceful that there’s no easing into any of it.

From there we journey into Divide and Conquer, which I believe right now is my favorite song on this album. Brian Fair’s voice has the ability to remind me of being 21 at my first drinking age metal show with my friends running around in a circle, hitting everything that moved. It has an early Shadows Fall-Art of Balance thrash’ness and high energy to it you won’t hear anywhere else.

Weight of the World is probably the heaviest more traditional metal song on the album, and is deservedly right where it belongs. And as we move on to Nothing Remains, I’m suddenly pulled right back into Brian Fair’s great lyric influence, which after all has been the driving force over the years for my love affair with every Shadows Fall album. They tend to release albums at times in my life when his lyrics mean so much that they tear right down to my bone.

Fire From The Sky was the first track released off this album, and what a release it was, driving iTunes sales through the roof on release day.

From Save Your Soul and into Blind Faith I once again found myself remembering what it was like when I was ten years old and heard my first Exodus album and heard those deathly magnetic guitar screams and melodic contemporary metal. These tracks have a way of being inspirational, yet fun. Blind Faith feels a lot like I’m listening to A Fire In Babylon again, which I consider to be one of the top three greatest metal songs ever conceived.

From there we rip into Lost Within, that brings you in with it’s hectic, sometimes chaotic drum beats and riffs, and brought back to earth with Brian’s vocals and a gang vocal portion of “BOW DOWN,” which every metal fan should do after hearing this album.

Walk The Edge is a fast paced, yet entirely pure traditional American Thrash song. I love bringing the roots of Boston into this one with some of the old hardcore influenced gang vocals.

Onto The Wasteland and Eternal Life, two tracks that seemed to mold very well together and not give in from start to finish.

To finish it off was A Death Worth Dying, a track that will blow you by and never let you go.

I sometimes find it difficult to offer an accurate representation of an album that is SO solid from start to finish and an album that I can’t seem to turn off. Since Tuesday this album has been on my iPod at work, the CD has been in my car, and my iTunes has been blasting it almost non-stop. I seem to find something different and inspiring about it every go-round.

Some bands have the ability to put out one or two good albums over a course of it’s history, and others just fade into the dark abyss of what once was rock ‘n roll’s glory, but Shadows Fall has somehow found a way to etch their names in the history books once again. I can only hope the rest of the world sees and hears the kind of band they have built themselves into. CHEERS!