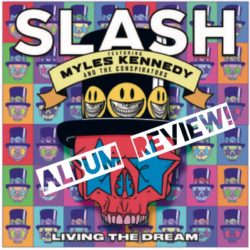 “Living The Dream” is a special record that has all the layers of Myles Kennedy’s beautiful voice and the screaming melodies of Slash along with The Conspirators to keep your love for traditional rip-roaring Rock ’N Roll alive!

If you tell me you like rock ’n roll but don’t like what Slash and Myles Kennedy have put together over the last several years, I may just hold it against you. Before getting into this album, let me tell you first that I’ve seen both Guns ’N Roses reunion tour and Slash w/Myles Kennedy & The Conspirators separately and both offer something wonderful. You may already know what GnR offers but what Slash, etc.. bring to the table is something fresh, original and down right just good rock ’n roll.

While I really enjoyed “World on Fire” and “Apocalyptic Love,” I feel like this new album “Living The Dream” is really something special and how Slash was able to knock this bad boy out while touring the earth with GnR we may never know. I slammed this album the second it came into me and right off the bat, with “Call of the Wild” while we are brought in my a guitar riff I can honestly say that it’s Myles Kennedy voice that just completely rips into me. If anyone has the perfect voice to ring rock ’n roll back to where it once was, it’s this guy. I sometimes hate that he gets overlooked in this band because of Slash but never, and I mean NEVER underestimate what he brings to the table.

As you get into the album more and more, while it starts with a rip roaring good time, it has tons of layers to it; “Serves You Right” is the second track and it’s an old school arena rock track that may appear in the beginning as filler but man, give it a second and Myles Kennedy will guide you through the journey into Slash’s solo and they compliment each other, dare I say it, better than Axl? Maybe, I don’t know. GnR is very near and dear to my heart, but God Damn!

As this album continues, my second favorite track is “My Antidote” because it takes us back to a bit heavier place while also leaning heavy on the melodic nature of Myles’ voice and really blows me away again by the layers and levels of complexity. And then you’re again, taken on a journey through the next several tracks, eight more to be exact that are completely original and don’t have an ounce of what could sound like re-used riffs, so wow! But then we are given a really special song towards the bottom, “The Great Pretender”, which really made me remember what it was like when I first heard GnR, and because GnR wasn’t afraid to take chances and they weren’t afraid to be rock n roll, or punk rock or metal, or straight arena rock. And this track I can turn off the lights, light candles and lay back jamming with a smile on my face – wow, that’s rare.

So without getting too much into this and leaving some things to be a mystery, don’t sleep on this album, don’t let yourself wondering what it sounds like and never listen to it.

Next article - Slash w/Myles Kennedy & The Conspirators with Classless Act »