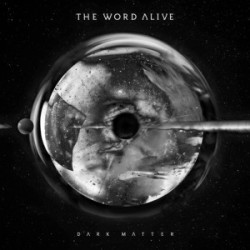 Once I heard the single, “Trapped”, I was hooked, and like many of you, eagerly awaiting the release of “Dark Matter”, the latest album by The Word Alive.   The sound is very different from their previous work, and yet still keeps much of what we love about the band. The album mixes metal with rhapsodic lyrics in a masterful work of art. The lyrics really resonate with the listener, and I have to give a shout out to drummer Luke Holland for absolutely killing it on each and every track.

Lead singer Telle Smith, has said of the writing process “was much more difficult, we knew it had to be our best album by a mile.  We spent the most amount of time on it.” And  “is something we consider to be our most dynamic and expansive album to date. This record completely defines and expresses who we are, and where we are going, taking the listener to the darkest and most honest places our band has dared to venture.”

The album kicks off with the explosive yet haunting track, “Dreamer”. The song creates a beautiful juxtaposition between the upbeat instruments and distressing lyrics. This bleeds into “Trapped”, a powerful piece about being trapped in your own head. Whether from insecurities or what, this song is relate-able to everyone.

If you’re looking for classic metalcore, “Made This Way” is the track for you. Jumping in your face, it relents, only to come back with swift guitars and the drums banging down like hail creating the strong beat. “And I found my place / In the empty spaces where my demons lay / I don’t believe that we as humans were meant to be afraid”.

“Suffocated” starts with the echo of Smith’s vocals, which really leads to the effect of feeling suffocated, bringing you viscerally into the song. The lyrics stab into you like a stake in a vampire, “When you feel there’s nothing left / That’s when you’ll find me dead”.

That’s not to say all of the tracks are maudlin, a personal favorite, “Grunge” is a ferocious ass-kicker, that mixes punk and metalcore into a revving good-time. Smith’s vocals, mixed with the drum beats and guitar, it will be stuck in your head for days. “Sellout” is another faceshredder, kicking into high gear right from the start and never letting up.  The title track “Dark Matter” is the best song TWA have released to date in my opinion, the breakdown hits hard as Telle laments “hell has been calling for me! I am not crazy!”

Lyrically, “Insane” is the best track, with lines like, “We’re all insane, in a beautiful way / We won’t change, until the tide comes and pulls us all away” and “Now let our voices be the change / So we don’t all end up the same.” While the overall theme of the album may be darkness, desperation, and loneliness, it also gives the listeners hope.  Branded, another powerful song with a manic beat and hard-hitting lyrics “Lost and found / I had no home / Found myself when I gave up hope / (so don’t forget your darkest hours / light the way to a life empowered)”.

Is Dark Matter what we were expecting from TWA?  No, not really.  Is it what we needed from TWA?  Yes, it absolutely is.  Powerful lyricism, in your face guitars, and drums beating your heart for you in every track.  Dark Matter is the best album of The Word Alive so far, with experimental tracks that work, and work well, keeping it fresh, instead of churning out an album of dull versions of the same song twelve times.  TWA very well may have changed the face of metal as we know it.

The Word Alive is: