Home » Featured » AFTERSHOCK 2017 : A Music Festival With a Lack of Identity? 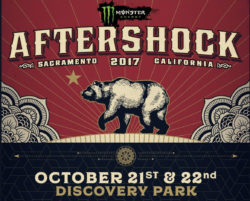 AFTERSHOCK 2017 : A Music Festival With a Lack of Identity?

While it’s still fresh in my brain, I would like to speak to my experience at Aftershock 2017 here in our hometown of Sacramento, CA. It’s been several years now since Danny Wimmer Presents started bringing this monstrosity of a music festival to Sacramento and all in all it’s been relatively underwhelming year to year personally for me. Don’t get me wrong, there have been highlights each year for me, and maybe it’s the metalhead in me that’s speaking up about this festival, but I’d like to offer some insight into why I feel the way I do.

Sacramento is a weird music town, period, point blank. If you don’t live here, then you don’t know, but anyone that’s worked in a local venue or been in a local band will tell you that this town is incredibly weird, especially when it comes to Hard Rock and Metal. Kids will come out in full force, and by kids, I mean the under 21 crowd. They will come out and support their friend’s bands and will support their favorite bands they love, which is what happens at Aftershock. The problem is that the festival tends to alienate the older more underground metal crowd that will always come out and support if you give them a reason, and will spend more money on booze because it’s generally an older crowd.

The problem being that this year on Saturday you had a ton of rock, hip-hop(?), and radio-friendly bands, and then you mix in Gojira and Mastodon, which I’m assuming is just merely to satisfy people that are the likes of me. Unfortunately, that didn’t satisfy me but instead did the opposite, and I heard many discussions throughout the day from people sitting down drinking beers waiting for real metal to come on complaining about the lack of really good metal such as Gojira and Mastodon. Sunday I showed up late due to some personal things, but also because I had no desire to sit through a whole day just to wait for Ozzy.

Please see Ozzfest Meets Knotfest, and you’ll see that Metal, real metal, stacked metal shows are making money, but I guess so is Aftershock. I just feel that Aftershock has become somewhat a mirror image of the city it’s in when we talk about live music – it doesn’t have an identity, and in that confusion not having an identity alienates a lot of people that are willing to spend even more money.
Now the positive since I’ve drawn you in with my biased negativity. NIN and Ozzy were a clear massive huge mondo win. NIN played a ton of great hits, and I haven’t seen that large of a crowd that charged up in a long time. Trent sounded better than I’ve heard him in quite some time and brought a basic, but insanely thoughtful light/stage show with them that really worked for that set of songs. It truly brought me back to realizing why I loved NIN all those years ago when The Downward Spiral first came out. Kudos.

Ozzy was well, Ozzy basically, I’ve now seen him 16 times, mostly on Ozzfest’s, but I always make a point to catch him everywhere because he’s such a presence on stage, a true living legend. I can’t say how many times I’ve seen Zakk Wylde but let’s say a lot. This Ozzy set was your basic, fun, energized Ozzy set, but the crowd in Sacramento, you could tell down in the pit has been waiting a long, long time for the madman to return to a city that he’s canceled more shows than played. I was standing next to one man around his mid 30’s that started crying, crying when Ozzy came out, this is the effect that he has on crowds, and this isn’t the first time I’ve seen it. I would say the only difference I saw in this Ozzy set was a moment when Zakk walked down into the crowd and went into what had to be a 20-minute guitar solo and Ozzy crossed his arms staring out at the crowd and then said very quietly, “Zakk Wylde Ladies and Gentleman.” It was that moment that I realized, and maybe I’m making some assumptions here, but perhaps Ozzy realized that he can’t control Zakk anymore, that Zakk Wylde is a brand, an uncontrollable monstrosity of a guitarist brand, not just Ozzy Osbourne anymore. In fact, I would go as far as to say that it genuinely is Ozzy and Zakk, a brand forged together over the years, the ones that understand each other better than any other duo.

Either way, Aftershock 2017 was a clear win for Danny Wimmer and a clear win for the city of Sacramento, but I fear that if it doesn’t find it’s identity soon, that it may never be able to recover with certain fan bases, and I want the best for this festival, I want to see it grow bigger and badder and I do believe that as far as headliners go, they’re in the right direction, but please, give us obscure metal and watch the crowds grow, stack the lineups a bit differently and take a note from Ozzfest meets Knotfest side stages, they did an incredible job this year putting together the lineup and start to carve out an identity for this festival and in turn Sacramento, and please no more Five Finger Death Punch.