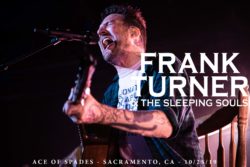 Frank Turner holds a special, weird, unusual place in my heart because when I discovered him it was a time in my life where I needed to hear a like minded voice, so I usually like to make every effort to see him when he comes to play live.

I was leaving for the show when I found out/realized that it was a solo acoustic set, followed by an unplugged full band set and I have to admit that I was a bit bummed about that, because his live shows (electric) are also an absolute blast filled with so much energy, similar to that of Springsteen. But i had decided to stick it out and give it a try, and it turns out for some reason on this night I was absolutely drawn to his voice and the acoustic and personal side of him.

In the past other acoustic shows I’ve seen they don’t do much talking in between each song, so what made this show really special is that Frank had decided to speak a bit about each song before he played it which made a really cool atmosphere, especially since the songs he picked to play acoustically are ones that seemed (i could be wrong here) like they were very personal to him to play. So it was a very pleasant surprise to my night where I wasn’t feeling super good and basically forced myself out of the house for this. But I’ll also say that about an hour into the unplugged set my eyes started getting really heavy and I realized with how tired I was from not feeling well that I would have really liked some of electric songs played to keep me moving a bit.

But besides the end of the show, I would say that Frank Turner, as per usual, is going to continue to build his fan base and could easily become a stadium rockstar, but for now I’ll take him acoustically or electronically. I think he really showed a side to himself and to his music that was very special to be a part of.