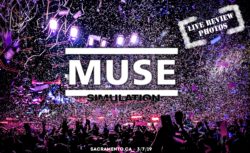 Out of my comfort zone i went for a show that every person I know has told me they put on an absolutely monstress performance. I was not disappointed.

On album, the band can sometimes seem to be a bit slow and unfortunately makes them slightly boring. This is not the case with their live show.

The second they came on stage and the lights and lasers came out the entire arena was incredibly energized. The singer (   ) rose from the middle of the arena from underneath in the middle of a choir of horns doused in lasers and cool LED’s. But this wasn’t the coolest part; with that the music came in and was incredibly symphonic and a little ruckus. This all indicated to me that I was in for a hell of a rock ‘n roll show, and a hell of a rock ‘n roll show is what I got.

As their set raged on for almost an hour, between the music, all of the electronica and an incredible stage show it sometimes felt as if we were in the club scene from TRON:LEGACY, and with their use of the some of the imagery I can only imagine that is exactly what they were going for.

But their stage show and lights are merely what appears to be an effect to garner attention and help support the music. This is a band that truly has embraced their role in the music world and fully acts as big rock stars; as they should. It’s funny that a band such as this has also clearly not stuck to whatever genre they are in either, and have fully gone off the rails in a great way with music that live, feels like it ranges from technica to a full on hard rock trio reminiscent of the early 90’s alt-rock scene mixed with Radiohead and a way more driving, forceful sound and singer that unbelievably carries his voice to places I would have never imagined.

In closing, it’s rare when you see a band nowadays that can completely command every second of the crowd and keep even the crowd with seats standing at all times. I heard everyone around me singing to every song and waving their hands and the band taking every second of it in and even during a piano ballad not a single second of energy in the room was wasted.

What a masterful performance of a rock show mixed with absolutely stunning visuals and in this age with short attention spans they reminded us all that big stage shows and good rock ‘n roll can still co-exist.

- Previous article « In Flames – I, The Mask