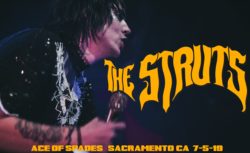 As I sit and watch the magnificent line of Struts fans slowly make their way inside, I’m reminded why I always show up about 30min after the doors open-because there is absolutely no need to wait in those lines in mid size venues, and I’m also pretty blown away by the incredible mix of fans.

Everyone from ten to seventy are walking in to Ace of Spades, spanning multiple generations and (without a Bay Area show on this tour) multiple areas of Northern California. Which also gives a really nice opportunity for people watching.

As I entered I had some trouble with my photo pass, which was quickly remedied (as you can see) and made it in just in time to [luckily] catch The Glorious Sons. They were just that, pretty god damn glorious, and one can quickly tell where their influences come from, and while they cite bands like the Black Keys, and other indie rockers, I hear more of a 70’s southern rock vibe with a newer spin and a true 70’s rocker attitude on stage, to go along with their look. They killed it from start to finish on a short set with everything from slower rock ballads, to driving true gritty rock ‘n roll rifftastic tracks, and even a harmonica (ala Steven Tyler). A very impressive set from an impressive young band that I’ll continue to look out for, because if they play their cards right they could easily be on the verge of exploding.

After a short wait, I ran to the front to shoot The Struts as their intro music came on and the lights came down.

Now I’ll be the first to admit that I have never given The Struts a fair shake, and I’m not entirely sure why, it’s just one of those things, but on this night, for some reason their [totally] Queen inspired set was incredibly impressive and a shit ton of fun to listen to, shoot and watch!

I’m so used to metal and punk shows as of late that it took me a second to allow their classic rock sound to permeate my ear drums, but once it did i found myself really enjoying their fist pumping, jumping around old fashioned rock set (after all, old fashioned raw rock was why I got into this to begin with.)

As they went through song after song with a driving force, and very little (or none actually) talking it really pushed forward and kept the pace up. With that, everywhere I looked there was dancing (and no I don’t mean a mosh pit), and smiles filling the crowd. Then back at the stage I look up and hear the guitarist ripping some nice solo riffs, a nice surprise this day in age with MacBooks taking over a lot of newer rock.

Then we reached the end and while I was relieved to some degree because of my tiredness, I was also really in a great mood because it reminded me of shows and bands I listened to with my dad years ago with a nice refreshing newer take on it.

Thank God real rock ‘n roll with real musicians haven’t completely been overtaken by laptops and bands like this can come out and attract young and old and still recognizing that it’s a “show” that must be put on, because let’s face it, Drum Solos and Guitar Solos are usually lost on young rock/indie bands these days, so it’s refreshing to see. Simply put-wow.