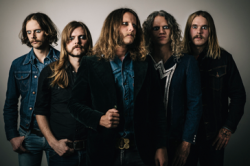 Our very own Kevin Clem had a chance to converse with Pontus and Axel of Swedish rock group Horisont over Skype about their brand new album, Odyssey, and much much more. They explain their early influences, their desire to tour the US and also discuss how their Odyssey story ends. Check out the entire audio interview below:

Formed in 2006, Horisont have spent close to a decade kicking ass, taking names and establishing themselves at the forefront of the Scandinavian retro rock revival (see also Witchcraft, Graveyard etc), injecting their sound with early-Status Quo-styled boogie blues, prog complexities, NWOBHM swagger and fire-spitting choruses set to scorch the eyebrows of the first ten rows. This is music made without irony, unafraid to acknowledge an allegiance to past greats such as Deep Purple, Black Sabbath, Cactus, Thin Lizzy, the aforementioned Yes and Judas Priest.

This quintet’s rock trip might be retro but their songwriting is timeless; a good melody lives forever and Horisont have songs in abundance. New album Odyssey is exactly as its title suggests: an epic journey into the known. A sonic trip. A mighty voyage of sound. You could even call their fourth full release a concept album – although they themselves prefer “space saga”. Either way it’s a brave band who open their album with a ten minute-long track, yet on the album’s title track Horisont dive straight into the deep end, delivering space-rock with all the dexterity and deftness of the very best prog rock’s finest, such as early Yes or Kansas.

Odyssey was recorded in Studio Kust in Gothenburg with producer by Henrik Magnusson. It was, the band explain their most harmonious creative period ever.“No Horisont recording session has ever been this good,” admits Delborg. “We had worked with Henrik on our ‘Break The Limit’ single and knew that he was our guy. All the basics were recorded live in just a couple of days. Then we spent a lot of time on the intricate details.”