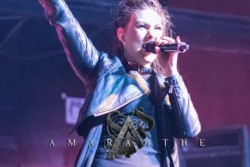 It was a chilly evening in Sacramento but that wasn’t going to keep Swedish metal band Amaranthe away. They even joked during our pre-show interview that this was similar to their summer. Cold temperatures or not, Amaranthe brought the heat and had the whole place rocking! This was one of the final shows on their current Massive Collision Tour before heading back to Sweden but they showed no signs of being ready to stop. They packed a set full of 19 of their biggest songs and anthems, being joined along the way by Heidi Shepard of the Butcher Babies as well as John Strickland from Lullwater as they were helping to fill in for melodic vocalist Jake E. They even pulled a “rockstar” moment and had pulled a fan, Dane, from their crowd in Arizona and brought him along to help knock out the vocal duties. It made an already special evening fell that much more special.

One thing that always amazes me about bands that use a vocalist who hits such high ranges like Amaranthe’s Elize Ryd is how they can knock out song after song, night after night and still hit the perfect note. Elize has one heck of a voice and it’ll give you goosebumps when she hits those high notes! Carrying the other end of the vocal range is Henrik Englund, his growls and low end vocals round out the band sound and give it that edge that some melodic bands are missing. Combine them both with the array of guest vocalists and you can imagine how special this night was.

The band rocked nonstop through their biggest hits off of all their major releases, personal favorites of the night were Digital World, Dynamite and the duet with Heidi of the Butcher Babies on Amaranthine. But overall there wasn’t a dull moment in the whole set. You can tell how passionate all of the members are about their music and performance just by watching them and their interactions with the crowd, also in our pre-show interview they were genuinely happy with this current tour and the reception they’ve been receiving night after night. As they now head back to Sweden all I can say is that when they visit that states again definitely make it a priority to go see them, it’s a performance you will not forget!

View our full Amaranthe Gallery on our Facebook Page

- Previous article « Ice Nine Kills – Every Trick in the Book