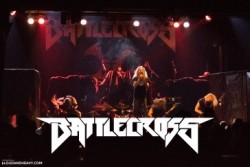 Explosive and infectious energy and vocals, face melting and harmonizing guitars, monstrous bass and drum, synchronized windmill head banging, and circle pits are all common place at a Battlecross performance!

I cannot say enough good things about Battlecross! They are Metal. Every song was crisp and powerful. I was thrilled to hear ‘Not Your Slave’ and ‘Never Coming Back ‘. The overall energy from the band fueled the audience and had us all throwing out fists and horns in the air! The only negative comment I have is that their set wasn’t as long as I would have liked. Everything else was great! I love seeing a band have fun and engage the crowd the way Battlecross did!

Buy their albums! See them live!