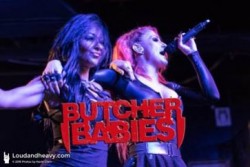 There was a definite buzz in the air as the Los Angeles based metal group, Butcher Babies, was preparing to take the stage. They were in town in direct support of the headliners, Amaranthe, but looking over the crowd you never would have guessed that this wasn’t their show. There were both men and woman in attendance with heavy eye makeups resembling past looks of the band, the crowd was saturated with a sea of black and red band shirts, and this place was pumped to see the Butcher Babies!

The band came on hard and fast, opening with a crowd favorite and lead single off their recent album, Take It Like a Man. The song Monsters Ball got the crowd moving instantly and singing along. The energy remained cranked to 11 throughout this entire set, and that energy they give off on stage definitely is reciprocated by the crowd. Their setlist that they unleashed on us primarily focused on the latest album, which in talking to the band beforehand they stated that it was written based off of what they saw their fans enjoying the most during the shows.

Personal highlight of this show came when the band encouraged a mass crowd surfing during their song Jesus Needs More Babies for His War Machine. The energy of the crowd hit its max as bodies were flying & the pit stretched across the floor. Heidi and Carla were high-fiving everyone who crossed over the barrier it and it was their personal way of showing appreciation for what the crowd was putting out.

During my interview with Chris and Henry before the show they made a comment about their “10 or 10,000 rule”. A rule they have amongst themselves to give it 110% each and every night regardless of how many people they are playing for. This is a band that you can tell truly enjoys being up on that stage, they have a chemistry between all of them that translates into a seamless and brutal assault from start to finish. This was my first chance to see the band in a smaller more intimate setting and I left truly impressed. We look forward to seeing them again when they return with Cradle of Filth early next year after taking some deserved time off the road for the holidays.

View our full Butcher Babies Gallery over on Facebook

Next article - Ice Nine Kills – Every Trick in the Book »