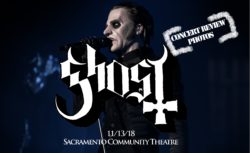 I’ll be the first to tell you that I have no idea how or why Ghost has gotten as popular as they are, and in fact when they announced this tour and the incredibly large venues they’re playing I actually asked my friend “do you think this is going to get anywhere close to selling out?” His response, “After this they’re playing the Forum in LA.”
I was dumb-founded.
After all, their music isn’t anything ground breaking or something we’ve never heard before, and the most bazaar thing to me is how huge they’ve gotten in the metal world, because, well….they aren’t metal. I’ve also never been a fan of the music, but definitely very curious about them because of their stage presence more than anything.
Jumping forward a bit to the day of the show, when I found out that they were playing at the Sacramento Community Theatre, I was a bit shocked as it’s usually a theatre reserved for off broadway shows as opposed to concerts. But this may have in part helped with the over 2000 person crowd staying not so rowdy and not so intoxicated, which was nice to not have to deal with.
Soon after meeting some friends and finding my place for photos (which by the way, when there’s no photo pit and you’re attempting to get quality, artful photos from the designated corners of the stage some 100 feet back, it makes it difficult), I set up, chatted with a security guy and waited for the band.
Then the lights went down and the band came on in all their weird, satanic (?) glory, which included every member of the band (Ghouls and Ghoulle’s) wearing masks and loudly getting the beginning of the first track “Ashes” as singer Tobias Forge wearing a full black suit and a strange old man (of death?) mask enters the stage and starts belting into the song.
As I went through my photo routine and the band rocked quite hard into track after track which included the famed “Ritual” I started to realize that this was not just a concert with a rock band but it was meant to be a theatrical performance, and man did they bring it. I went back to my seat after the first several songs, had a beer and realized song after song that this may have been one of the most enjoyable shows I’ve ever seen, up there with GWAR and Iron Maiden as far as theatrical type shows go.
I saw Papa Nihil decked out in a white robe, mask, tall popes hat and aviator sunglasses rocking the Saxophone! And a group of musicians who surprised the hell out of me how heavy and how incredibly precise they were, and seemingly perfectly fine not showing their faces and going along with the gimmick that is paying off in a big way.
From there it went into a fifteen minute intermission (which is way cool by the way and allows you not to miss anything going to the bathroom), and then the band came back out with Tobias dressed in the famous red cloak and hat and ripped through another ten tracks that were incredibly entertaining, before ending on “Monstrance Clock,” and “The Host of Seraphim” in the encore.
And even the encore was something special and definitely had a very theatre encore feel to it.
All in all, after 27 songs and almost three hours of this fantastic show I realized that while their music isn’t something I would listen to on a daily basis or by free will the majority of the time, I have found myself telling every single person I meet that they have to, nay, must go see GHOST when they come through again because it was hands down one of the most entertaining shows I have ever seen, whether a metalhead, punk, rocker, or classic rock fan, there’s no doubt that anyone can find something to enjoy in their show and I for one look forward to my next chance to see them and photograph them again!
Cheers!

Next article - High On Fire Nominated For A Grammy! »