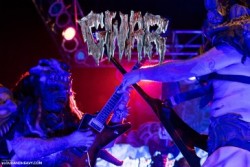 “GWAR is NOT dead!”  Blöthar

This show was amazing. GWAR played a solid 19 song set and fought a mighty foe! (I won’t spoil what they are fighting)

GWAR stole my car and started a war! Every song, every joke, every murder, every spray of blood and spew were perfect. They played songs from their entire career. I was thrilled to hear Babyraper, I’m in Love (With a Dead Dog), and Meat Sandwich. The on stage fights and story of the show were awesome! The blood and spew shot so far that it was dripping from the ceiling! GWAR paid tribute to Oderus with a chant led by Blöthar. Their encore songs,  The Salaminizer and Sick Of You, smashed the audience in the face with energy and excitement. The pit erupted again as the Slaves began feeding hot chicks into a modified Meat Grinder in the floor, more like a Meat Disposal .