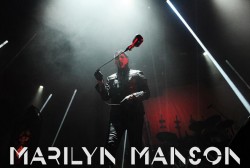 Day 1 of Monster’s Aftershock festival was winding down, the day had been packed full of some great rocking music. The sun was starting to set and a majority of the people in attendance had their attention turned to the main stages for possibly the most anticipated performance of the day, the one and only Marilyn Manson. There was a buzz among the crowd as the lights went down and a shadow figure emerged from the fog. Very little time was wasted as Manson immediately ripped into Deep Six and the crowd erupted.

The energy remained high as Marilyn Manson cranked out an assortment of his biggest hits. Surprisingly putting a focus on his Anti-Christ Superstar album over his latest release, The Pale Emperor. Nonetheless, this performance rocked! This wasn’t the same Marilyn Manson I saw several years ago, no this time he brought it 100%. There was a youthfulness and rawness to this performance. This performance had all that you’d expect; huge hits, props and burning bibles.

I wish this performance could have went on longer, but such is the dilemma with festivals. I for one will certainly go back and see him again if he comes back around, and I would definitely recommend it to anyone else who has a chance to see him.