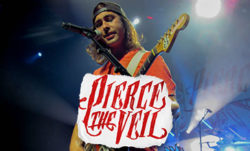 For the release of their 4th album Pierce the Veil wanted to do something special for their fans, a once-in-a-lifetime event.  Before playing at the sold out Mayan Theater in LA, frontman Vic Fuentes told the crowd “We’ve never played an album in its entirety before, but we thought you’ve waited long enough for this new music to come out and we wanted to do this one time, so welcome to the Misadventures Tour.”

Staying true to the album track listing, the set started with Dive In and continued into Texas is Forever, PTV’s fastest song to date, with a confetti cannon blast that covered the place in red and white.  From the get go the energy level was off the charts, fans screaming the songs and jumping along with the beat.  Even during the slower songs, like Floral & Fading, the energy was incredibly high and of course the place was in tears (myself included) during the powerful single Circles.

While Misadventures doesn’t have an acoustic track, for the show Vic played Today I Saw the Whole World on his acoustic guitar before the guys re-joined him on stage and cranked it back up a notch. Despite the album being out for just a little over a month, fans had already memorized the tracks and sung their hearts out with Vic during each and every song.  During the “last song” Song for Isabelle Vic called out “this is going to be really special I promise you, all you gotta do is sing along with me.”  With the lights dimmed and the fans chanting the fading out lyrics of the song Vic thanked the crowd once again before they exited the stage.

Before they could even get backstage the crowd was erupting in pleas of “ONE MORE SONG!” and “PIERCE THE VEIL” over and over again.  Returning to the stage to play an encore and to blast the crowd one last time in confetti, PTV played fan favorites Bulls in the Bronx and King for a Day to close out the night.

If you have the chance to see PTV live, take it.  You will not regret it! Check out our photos of the show below!

Pierce the Veil will be on tour through the end of the year; getting ready to bring Misadventures to Australia before embarking on another full US tour (this time with Neck Deep and labelmates I Prevail) and then heading over to Europe.
Tickets, Merch, and more at www.PierceTheVeil.net