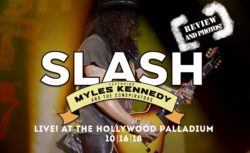 When a person such as me spends time in LA, pretty much any amount of time in LA, I start to feel at home every single time. It’s amazing that after years of traveling back and forth from Sacramento to LA that I haven’t grown tired of it yet. In fact, with my film career beginning to move forward pretty heavily and my photography starting to make waves it’s becoming even more of a draw to me than ever before. And Wednesday October 16 as I was spending the week at the ADOBE MAX conference and I was almost as humanly exhausted as one could get from lack of sleep over three days, I found myself leaving the conference at 4:30pm and walking down the street and beginning to get completely amped for the show ahead of me at the Palladium!

But first, to prepare for such a show where I would finally be able to photograph a legend, nay, one of my top three favorite guitarists of all time, nay, from my second favorite band of all time I would need to have a drink or two to calm the nerves. I found myself inside of a quaint little bar across the street from the Palladium called “The Bowery”, who claimed to have the best burger in LA, and well, to my surprise, it wasn’t the best burger I’ve ever had, but it was definitely a solid burger and nice LA priced drinks for happy hour, so you know they weren’t cheap drinks. I got the feeling the place was trying to pull off a dive bar attitude and look, but instead it just felt like an overly hyped hipster bar with expensive drinks. Either way, I enjoyed my libations and my good-enough burger and wandered my way across the street.

As I entered the Palladium with it’s super-rad retro look, like you’re walking straight into 1987 LA I had this wave bolt through me, as if to walk through time, but these venues on the strip will do that to any fan of rock n roll. As the crew decided how to deal with all of the photographers, letting us in, kicking us out, letting us back in, yada yada yada we finally did settle in and at first I had no idea about the opening band “Classless Act”, as I had just been asked a few hours prior to cover them and just about the only thing I knew about them was that Slash’s son was in the band.

But let me tell you, once I got to shooting some photos, I quickly got into my groove and really started to pay attention to the music and quickly realized that these kids were screaming out some wicked good 80’s dirty grimy rock ’n roll. And away we went, I was grooving to the music, jamming along with it and taking some rad shots. Not only was I surprised about the band, but I was also impressed by the fact that they appeared to have been enjoying themselves. You never really know how a band of teens is going to iron out, but they really did a killer job. They went from song to song, quickly through their set with precision, keeping the pace rocking and engaging with the crowd. I won’t be surprised if we see these kids quickly clime some charts and land on some bigger and bigger gigs now that we all know just how for real they are!

As they ended their set, we were quickly rushed out of the photo pit area to the outside, and then we couldn’t have been waiting for more than just a minute or two until the security came and hurried us back into the venue and down into the photo pit where we all approached our positions, camera’d up and waited. Suddenly, the lights go down and the crowd screams, and in a place like this, those screams are loud! I check my settings on my camera one last time and I can feel myself shaking, shaking? All because I realized that Slash was one of my top two favorite guitarists growing up and Guns ’N Roses was my second all time favorite band. I was nervous, but because I was looking for a specific photo, and I was just going to wait for him to come to me so I could get it!

The band takes their places and Slash walks right by me, camera comes to my face and I distinctly remember smiling boldly and away we went, right along with the band!

Slash and Co. took no prisoners as they ripped right into “The Call of the Wild”, “Halo”, and “Standing in the Sun” to start it off. And the reason I mention the first three songs is because that’s the amount of songs that we get to shoot before being told to leave the photo pit area, which was just fine because I managed to get some beautiful shots and absolutely had the time of my life for this forever massive G’nR fan turned Slash’s Snakepit and now with Myles Kennedy & The Conspirators fan. After that I grabbed a beer and came running back in to enjoy the rest of the show which included some nice Slash solo songs such as “Back From Cali,” “We’re All Gonna Die,” “By The Sword,” and “Starlight. Not to forget we also got a nice rendition of “Fall To Pieces” from Velvet Revolver (which to be honest, I’m shocked Duff McKagan didn’t come out for! Then there’s the great “Rocket Queen” by Guns, and ending the first majority of the night with “World On Fire,” a real great track with Myles Kennedy.

And then there was the moment when the band came back out on stage after taking a quick break for the encore, and before anyone on stage announced it, the whole crowd started to lose their minds as Duff McKagan and band walk out, and Slash casually announces his bandmate. Just after Duff gets guitar situated, they tear right into “It’s So Easy,” a G’nR classic and the place goes bonkers, you could feel the energy pulsating throughout the room as the entire crowd is belting out every lyric to every line! All I could think was, how special was it in the 1980’s in LA seeing bands like G’nR in small clubs tearing it up. I’m an east coast boy, so I’ll never really know. Either way, Duff left after banging that track out just to get everyone all riled up and Myles Kennedy strolls on out to finish up their set with “Shadow Life” and the always fantastic “Anastasia.”

Now let me tell you, I’ve see this lineup once before several years ago opening for my favorite band of all time Aerosmith, and I really thought that would be the closest I ever got to G’nR until recently. I say that because the band is just as volatile on stage, just as intense and totally killer from top to bottom, they have the same tenacity and just feel slightly older to be able to deal with everything totally different. But both times now watching this band play live, they have a ton of power, and killer riffs, but let me tell you, and let me make this perfectly clear that Myles Kennedy’s voice may just be the best voice in rock ’n roll today. What he is able to do with his talent so easily is amazing and I feel lucky to have been able to see them twice and then even luckier to have gotten to see them just tear through a brutally good set of songs along with the kind of, maybe, not really G’nR piece towards the end, just a killer night, top to bottom, and now I’ll never be able to forget the first time I got to photograph Slash!

In short, and to wrap this up, don’t, I repeat do not sleep on Classless Act, if they stay as raw and fun as they are they could be huge in the coming years. And of course, if you aren’t going to see Slash with Myles Kennedy & The Conspirators because you don’t think it’s as good as G’nR, wake up! This band is just brutally good and won’t disappoint any rock fan out there if you like a good old fashioned riff-smack in the teeth!”

Next article - High On Fire Cancels US tour »