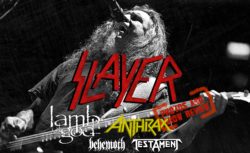 My entire concert life has been riddled with Slayer, for good or bad, on and off days, they’ve just always been there lurking in the background as a band that I never went out of my way to see because they were always there, with the exception of one time at The Warfield in San Francisco many moons ago. But this time, when the opportunity came about to photograph Slayer on their farewell tour, well, how could I pass that up, come on, it’s fucking Slayer!

But first let me begin by saying that I knew going into this show that it would be just an insane show from both a fan perspective as well as a photographing perspective, boy was I not disappointed on any front. I walked in the front door, grabbed a beer with a few friends while we waited for about an hour and watched the hordes of long hair metal heads meander their drunken selves to another beer booth and march tents to collect on their $40 Slayer gear, after all, it may be the last time to have that chance.

Shortly after, Testament hit the stage, and what a way to begin on this 90 degree day in the valley. Testament is always a treat for us thrashers, and while I was disappointed with their shortened set they still found a way to shred their way through some of the classics, and some of the new, soon to be classics! Chuck Billy’s voice has seemingly gotten better over the years, shockingly and when Alex Skolnick returned several years ago, it obviously has given them a much further life into this new thrash age we’re entering.

Next was the Behemoth, and as the tour manager shuttled all the photographers back into the photo pit area there was already blood on the floor, spilled in several sections, a bit early in the day, but what the hell, right? Then Behemoth entered the stage with their signature white makeup and black eyes, blasting some of their own brand of death metal. They sure did come on stage right, even with their also abbreviated set from the feeling I got, and played well to those in the crowd that were looking for a bit of Satan in their lives for the day.

Then of course with the ever so ruckus Anthrax took the stage with the classic “Caught In A Mosh” and absolutely shredded the audience to get their set rolling. This was of course only the first of five songs, which was incredibly disappointing, this is a band that can destroy a crowd for a much longer period of time. Either way, Joey Belladona and crew sounded just as stellar as they always do, absolutely impressing, but now I have to implore them to please do a headlining tour!

Looming was the always exciting and ruckus Lamb Of God, and as we took to our respective spots in the photo pit just seconds before they entered the stage we were greeted with a roaring “LAMB OF GOD” chant as the lights began to come down. And then the band that has really hung their hats on being the nasty one that has stuck around from the late 90’s/early 2000’s metal scene came on, and man, did they! They opened with “Omerta” and really tore the roof off the place, if there was a said roof. Randy was clear, concise, level-headed and for the first time in a while of me seeing them, extremely impressive and sounding just like the band that I remember seeing open for Shadows Fall and on those Ozzfest second stage years, purely dominant to say the least.

Then of course, there is Slayer, the almighty, the insurmountable, the never to be forgotten who when the lights came down, blasted flames across the stage and the crowd went ape shit – for lack of a better term. Now, I have seen Slayer more times than I can literally count, and every time I’ve been impressed with how solid they always seem to sound.

But on this night, there was a certain feeling coming from the stage – maybe it was the newly beard shaved off version of Tom Arraya we got, or maybe, just maybe it was that from all these years of seeing Slayer I’ve never been fortunate enough to be close enough to see Tom Arraya smile while looking out at the crowd. I also witnessed him several times glancing at Exodus guitarist and fill-in for Jeff Hanneman Gary Holt and giving him a nice smile and nod. This was such a great moment in metal history for me personally – because it always makes me so happy to see bands enjoying what they’re doing, and while it killed a bit of the mystique for me with Slayer, it made me so happy and made me feel like that moment was mine and no one elses.

They ripped and rolled through all of their classic hits, and some new hits, including ‘Repentless’, ‘War Ensemble’, ‘Hell Awaits’, ‘Raining Blood’ and many many more. When you see a band at their age go through what was almost 20 songs, you know they want to give the fans everything they can, something to truly remember one of the greatest thrash bands of all time. On this night in Sacramento, Slayer was perfect from start to finish, of course I think the only thing missing may have been Dave Lombardo donning his seat where he rightfully belongs, and of course while Gary Holt is one of my favorite guitarists ever, it was still missing the image of Jeff Hanneman, who will always be in our hearts and minds as Slayer takes their rightful spot in the halls of retired heavy metal bands. Good night and goodbye, it’s been a great run for one of the greatest and a night I’ll remember until the day I die.

Below is a sampling of some of the fun shots I got throughout the day. You can see more on my website at Josh Pierson Photography