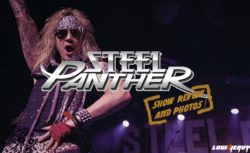 I don’t know that I can say anything that hasn’t already been said about Steel Panther, so I’ll just say what my experience has been like over the years and how it pertains to this particular show.

Several years ago I was brought to a Steel Panther show back when they were the house band for the Roxy on the Sunset Strip, it was one of those experiences that are hard to duplicate in writing or in person, but in short, you walk up to the Roxy and all the dudes are stuck outside while all the ladies are let in first, then while inside they play for almost 3 hours playing some of your favorite 80’s hits from every popular 80’s band you can think of. They fly over the audience, invite ladies to mock strip on stage, and basically recreate the LA 80’s concert s

cene for you in the 2000’s. It was truly an experience for the ages, and I never thought I would ever see that show again, especially after their strange performance at the Aftershock Festival last year.

But, I’ll be the first person to say I was wrong!

Last weekend at the best mid size venue in California – Ace of Spades in the weird little town of Sacramento if you were in that place, you could feel the buzz, you could feel how insane the crowd was pumping and waiting for them to come out. On one hand it amazes me that a band like this has survived over the years touring on original material, on the other hand it’s killer that they’re able to still play songs they love “better than the originals” and still play their own material while having an insane amount of fun doing it!

Most people that know me know that I’m heavily involved in film and theatre, and the first thing I noticed when they walked out while being up front shooting photos, they made a point to make not just them, but the two photographers in the photo pit (me

and Dillon) and the entire crowd be part of the show. It was evident to me that they really want everyone in that building to have the time of their lives and really be part of something special as opposed to just going up on stage and regurgitating songs they’ve played thousands of times. Kudos to that.

For the first time in many years of covering bands I think I had the most fun shooting a band than I’ve ever had, and wish I had lined up an interview to chat with those dudes because I can only imagine how fun that conversation would have been. Alas, maybe next time.

Either way, I implore you, if you are a fan of any kind of live shows, that you go, run, sprint, roll, whatever you can do out to one of th