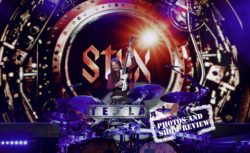 As I wandered into a semi busy amphitheater that sits about an hour north of Sacramento it was very apparent how many people were here for the opener – Tesla. And why not?

They are after all hometown heroes to some degree, and definitely for an older audience that was more about the 80’s hair scene than the late 90’s Deftones scene that followed. I’ve seen Tesla a few other times, but I’ve never seen them “plugged in” so to speak so I didn’t know what to expect. And what I got was the best seat in the house for the best 80’s band from Sacramento. Frank Hannon and Co. really rocked the Toyota Amphitheater for a special treat for those that have been hanging on to their childhoods in the area. I can say they were polished from head to toe, stem to sternum. What a way to rock and keep it 100% genuine the way they intended. I would suggest not missing this stellar rock band if it tickles your fancy, especially the not unplugged version.

While I will say that there is a certain level of cheese factor that goes along with STYX, I will whole heartedly admit that they entered the stage with more enthusiasm and energy and pure rock n roll than most of the metal and punk bands I see on a daily basis.

Playing right into the hands of long time fans by jamming out almost their entire debut album, and pretty much every song off of their greatest hits, purely astonishing. Almost every member sings a song at some point through their set, and it really seemed like they were truly one of the more talented bands I’ve seen in some time, and entertaining as all hell, from their stage presence, down to their set list and light show. Tons of energy, so much fun!

Next article - My Night Out With Dimebag Darrell and Vinnie Paul »