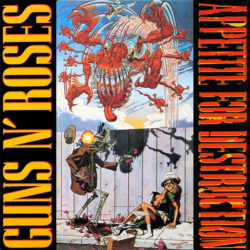 In an age where I had no idea that box sets were still a thing, it appears that Guns ‘N Roses have decided to NOT reunite as many speculated, hoped and prayed, but have decided to instead continue the cash cow that has become the new GnR. Apparently it was not enough that they were the second highest grossing concert tour in 2017, that they have now planned to release a full box set with 73 tracks in total, with 49 previously unreleased, along with a remastered version of the original “Appetite for Destruction, 25 unreleased songs from the band’s 1986 Sound City sessions, the band’s early EP ‘Live ?!@ Lkke a Suicide EP’, and a 96 page book with photos from Axl Rose’s personal archives and more.

This information comes to us from our friends over at www.metalsucks.net who seem to have gotten the scoop very early, and appears that a billboard has gone up in LA with a release date of 6/29/18.

Good shit. Good fun. Enjoy for everyone that will rush out to grab this gem.