Home » News » High On Fire Nominated For A Grammy! 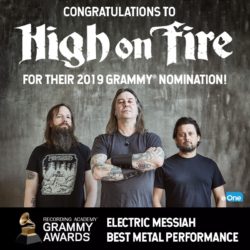 High On Fire Nominated For A Grammy!

Well, it’s about God damn time a band such as High On Fire was recognized. I’ve never been a supporter of the Grammy’s or the Oscars because it’s a “who you know” and “popularity contest” as opposed to what it should be – about the music (or movie).

Congratulations to High On Fire for breaking into the elite.

Directly from the press release:

December 7, 2018 — HIGH ON FIRE has been nominated for a 2019 Grammy Award for “Best Metal Performance.” Joining past nominees like Metallica, Motörhead, Faith No More and TOOL, this is the first time the band has been nominated in their twenty-year career. “We are elated to see High On Fire get such a nod after twenty years,” says eOne’s Scott Givens, SVP, Rock, Music. “Congrats from the entire eOne team, this is well deserved!”

We are so honored to be appreciated by our peers,” says vocalist and guitarist Matt Pike. “We love and live our art.” ”It doesn’t matter whether we win or not,” says drummer Des Kensel. “It’s just an honor to be recognized for our hard work and sacrifice after devoting our whole lives to music.” Finally, bassist Jeff Matz adds, “This is pretty mind-blowing. We’re beyond thrilled about the nomination. We all put a lot of sweat and sleepless nights into writing and recording this album. It’s amazing that our efforts are being recognized in this way.”

High On Fire recently announced the Electric Messiah tour 2019 in continued support of their new LP released earlier this year. These dates will be the first time the band has played live since the cancelation of their tour with Municipal Waste earlier this year due to the partial amputation of Matt Pike’s toe.

High On Fire released Electric Messiah last month to some serious critical acclaim. The A.V. Club stated that “The bar for metal album of the year has been raised” and they couldn’t be more correct. Electric Messiah has landed on a myriad of 2018 year-end lists including A.V. Club, Revolver, Loudwire and Consequence of Sound.

Consequence of sound said the new LP “successfully construct Sabbath-ian, earth-moving riffs as their blueprint.” Pitchfork said boldly, “When High On Firerip, it’s like they’re tearing through the whole universe.”

“I had a dream about Lemmy,” says Pike, explaining the inspiration behind the title of High on Fire’s title track, “Electric Messiah.” “When Lemmy was still alive I always got compared to Lemmy,” the gravelly-voiced guitarist elaborates, “so I had this dream where he got pissed at me.”

He gave me a bunch of shit, basically, and was hazing me. Not that he didn’t approve of me, but like I was being hazed. The song is me telling the world that I could never fill Lemmy’s shoes because Lemmy’s Lemmy. I wanted to pay homage to him in a great way. And it turned out to be such a good title that the guys said we should call the album ‘Electric Messiah.'”

Next article - Ozzy Healthy & Ready To Kill at Ozzfest! »