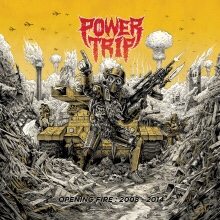 To kick off their celebration of ten years as a band, Dark Operative is proud to present POWER TRIP’s Opening Fire: 2008-2014, a complete collection of the band’s earliest non-LP output.

Opening Fire: 2008-2014 documents POWER TRIP’s self-titled 7”, “This World” (from The Extermination Vol: II LP compilation on Flatspot Records), “Hammer of Doubt” (2010 version from America’s Hardcore LP compilation on Triple B Records), and the entirety of The Armageddon Blues Sessions. All tracks have been lovingly remastered by the band’s longtime producer Arthur Rizk with the release being rounded out by stunning artwork from Portland illustrator Matt Stikker.

Opening Fire: 2008-2014 is being offered initially via all streaming and digital service providers to mark the launch of POWER TRIP’s North American headlining tour with Sheer Mag, Fury, and Red Death. Digital preorders for Opening Fire: 2008-2014 can be found on the bands bandcamp; LP, CD, and cassette versions are currently in production and will be available in the coming weeks.

POWER TRIP‘s Southern Lord-released breakthrough album, Nightmare Logic, has earned praise from The New Yorker to a Pitchfork’s Best New Music, to countless best-of/year-end lists The band was awarded the Best Metal Album Of The Year from Loudwire and song placement in the WWE.