Home » Portfolio » Blog » A Night Out With Josh – Casualties 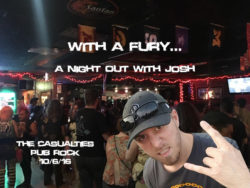 A Night Out With Josh – Casualties

When flying into Phoenix Arizona for a business trip at 12:50pm on a Thursday, and staying at a sweet Marriott, one does not only not think there will be a good punk/thrash show but that there will not be a good one. Alas I was mistaken, when I searched the interwebs and ran across what appeared to be an uber dive bar. I then made the mistake (or maybe misfortune) of clicking on the calendar link and seeing that The Casualties and a whole bunch of bands I’ve never heard of were playing that night at said divey bar. But I didn’t say did I? Well said bar goes by the name of “Pub Rock”…an interesting anticdote I’m sure could go with this name because first, let me explain to you what the dilapidated building looked like.

I walked into the dingy single person dark hallway covered in bad punk rock posters during the set of some band from Tucson that will remain unnamed, simply because I cannot name them, and I’ll say this, as I was buying my $2 PBR (yes, two dollars for you California hipsters that have driven up the price to $4.50) I quickly realized this unnamed band was trying very hard to sound punk with their 1 minute songs, but too bad, so sad, they sounded more like a really bad version of an East Bay thrash band just starting out in 1987 in their mom’s basement. Well, please for the love of all that is unholy, go back to your mom’s basement, you have managed to disgrace two (maybe more) genre’s of music by (dis) gracing us with your presence.

Upon entering, there is one fairly large room for the 21 and up folks (and let me tell you, the amount of 21+ dudes that work in offices sporting a mean jean vest with studs were in abundance) that was covered in Kansas City Chiefs memorabilia, and then a smaller front of stage room for the young-ins, followed by a decent enough stage and decent enough sound for such a small area.

FINALLY the pain stopped and then we were graced by a band with two guitarists (in a punk band), mind you I’m writing this as the show goes on so I’m not even sure they’re punk. Wait…yes they are.

HORIZON: Some band titled WMBW really understood what it meant to play an actual live show, meaning not sounding like they are playing for their mom in the basement. A good mix of southern California style punk rock and early hardcore, this in turn made me buy yet another beer. And take more blurry pictures.

Then, the tables turned, the horizon was at full tilt and the sun was shining.

They’ve found me, or I’ve been found, or I found them, or maybe we all did. Starving Wolves, a band from well, I’m really not sure, is truly the embodiment of all that is Punk Rock, or punk/metal. Does that have a fancy genre name? I’m really not sure but let me tell you, these guys are a pleasant surprise, stage presence of a classic thrash band pushing the crowd around in a giant circle pit, and then the singer asked for 3 seconds of silence for a friend that passed away, bringing him that much closer to the crowd. Who is this band? Where did they come from? Why have I not heard of them before? My guess is that they will be on some large stages in the near future. Please do not ignore this band.

After a very intriguing conversation with an individual I decided to turn my attention to another beer, and to my surprise they had Kilt Lifter on tap, so I must say, I was quite happy about that…and as I sipped on my beer the classic Casualties came on the stage.

And to be totally honest, I had never been to a Casualties show before and I’ve never even really been to that many punk shows but for some reason this one was an effective time filler for me. I was tired from the flight and a long day, and battling a bad cold for about a week, but something really hit me just right. The Casualties owned this night, they really brought it at 220%, really showing that no matter your genre, friends, family, creed, or religion that they are still alive and well tearing up two different scenes and showing us that the scene is alive. And well.

Just what the doctor ordered when you’re battling a cold; beer, thrash (and yes, sorry punks, it IS thrash), and good friendly conversation.

This is definitely one of the most eclectic shows I’ve ever been to, and that includes Exodus shows in the bay area. Alot of old school punks, alot of metalheads, and alot of beautiful women. But at the end of the day, this night was about the Casualties and what they have done for the hardcore/thrash community over the years. They are The Casualties and they take no prisoners.

Next article - Upon A Burning Body – Straight From The Barrio »