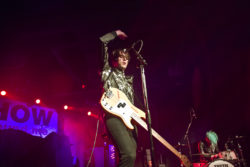 As the room goes black, a tall dark character comes out on stage holding his bass guitar at the ready. His face decorated with glittery black dots on his cheeks. As he reaches the mic center stage, he begins to pluck out a empathy song for the opening bands. He is followed by his percussionist who takes a seat at his left, stage right.  The drum kit glowing bright red in the dark as the percussionists begins to hammer out the beats to the song. This ignites the audience to cheer as they sign along to the song.

“I Don’t Know How But They Found Me (aka iDKHOW),” a line of dialogue from the movie “Back To The Future,” consists of Dallon Weekes and Ryan Seaman. Weekes, you may know as the bassist for Panic! At The Disco. iDKNOW is a musical entity with a conceptual backstory: a band from the late 1970s/early 80s that got its start on a popular cable access talent show (probably Channel 62 from the movie UHF), only to have its songs and music videos completely disappear and fade into obscurity. Thanks to the internet, iDKHOW is seeing its performances and recordings being rediscovered–for the first time–by a world that finally just might be ready for them.

“I was in the middle of making a record when I came across this series of old cable access talent shows from thirty-something years ago,” Weekes explained.  “It was this bizarre, low budget parade of the strangest people, and I couldn’t stop watching it.  I wanted to be on this crazy show, which was of course impossible.  That’s when the concept of ‘I Dont Know How But They Found Me’ began.1

True to his words, Weekes, blends the 70s/80s new wave, punk, synth-pop sound, David Bowie meets Talking Heads, and a little bit of Panic! At The Disco, to get the analog funk pop sound that is iDKHOW.

Next article - Don’t Miss Danko Jones on tour in Sacramento! »