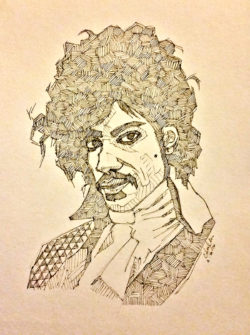 Upon hearing of Prince’s passing April 21st, a friend of mine asked me what it was about him that was so important. It’s a fair question, especially for millennials and those that have grown up in a time of internet, celebrity and pop stars. Most people under 30 years old probably know Prince more for his name and image than they do for his talent and influence. He is generally known as an icon in the same vain as Michael Jackson and Madonna. But why?

As a peripheral fan on the edge of the Purple Rain generation, I know Prince for his hits. And until his passing, I took for granted his cultural impact. He was an almost mythical creature, like a unicorn. A purple unicorn. And while he hadn’t released a new song that would make its way to my catalog in the last 20 years, his place among the icons of music was never in doubt.

Prince was an enigma. Even in the 80’s, when he burst onto the scene, he was as fascinating as he was talented. And he was supremely talented. Culturally, he crossed racial and sexual boundaries unlike any mainstream artist. He was an African-American that often wore women’s clothing, donned high heels, was famously synonymous with the purple, and could shred on the guitar. He was all of us, and none of us, all at once. Whatever you thought of him or what he was, there was a piece of his persona that everyone wanted, or wanted to be. Only adding to the mystery, he was a soft-spoken, shy, religious man. These traits made him accessible and relatable in a way that very few artists have been able to do before, or since. And it all came at the birth of a new generation of music and sound with the rise of MTV.

It can’t be understated the importance that MTV and cable television had in changing the face and sound of music, but it was only as successful as the artists it promoted. Prince would be critical to the station’s growth and the evolution of videos and pop stardom. While Michael Jackson will always be remembered for his cutting-edge videos and Madonna for her ability to seduce the camera, Prince was the provocateur. He was the artist, whether you loved him or hated him (or, probably more appropriate, feared him), that you couldn’t look away from. He challenged the listener and viewer in ways his contemporaries couldn’t. While Madonna dipped her toes in the pool of sexuality, Prince was doing cannonballs into the deep end with songs like “Dirty Mind,” “I Wanna Be Your Lover,” “Darling Nikki,” “Get Off” and “Sexy MoFo.” He didn’t just allude to things secretly thought and done behind closed doors — he belted ’em out for all to hear and, more often than not, acted them out on stage with a mic or guitar for all to see. His ability to communicate these taboo subjects so openly separated him and opened the door for many musicians, hip hop and rhythm and blues, in particular.

But Prince wasn’t just an artist that pushed buttons. He was a prodigious talent across the musical spectrum. Writing, singing, producing, dancing and playing whatever instrument fancied him — he could do it all. Trying to list out everything he could do would take too long, so instead of trying, here are a couple of examples:

Prince forever changed what it meant to be a star and transcended gender, genre and geography. He was an artist who helped shaped the musical landscape of today by breaking down and blurring barriers. And he did it all with humility, mystery and, as we are continuing to learn, humanity. He will be missed, but his legacy will live on through his decades of music, performances and influences.