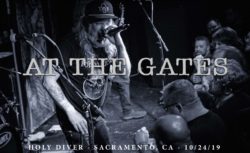 If you were to tell me that At The Gates were going to play a venue that only holds around 200 people in Sacramento on a Thursday night I would tell you you’re bat shit crazy. But, this was the case. And what a night it was to be had for everyone. In an absolutely jam packed Holy Diver there were two opening bands, the first of which I sadly cannot remember their name because it was a completely unreadable band logo, the second being hometown metal maniacs “Wastewalker.” But throughout these two sets you could almost feel the entire venue pulsating, many of us with giant smiles ear to ear just waiting on At The Gates to take the stage in our small city.

As soon as Wastewalker ended their set I quickly had to make my way to the front while everyone else was worrying about booze. With the way I like to shoot, I like to feel the music, be a part of the crowd, because after all, this is where I come from. And I believe that in order to properly photograph or properly document a show, you need to be in the shit with everyone else.

Suddenly the lights go down and the intro starts – At The Gates finally take the stage.

Immediately the entire floor turned into a circle pit, I held tight to my camera to ensure it didn’t get knocked out of my hands (which has happened before.) Track after track, they want through their setlist of classic ATG tunes mixed with a solid variety of new stuff to appease the newer fans. At The Gates bludgeoned our ears, made the crowd move the entire time, and brought their signature Swedish sound they perfected so well to our tiny town.

I’ve seen hundreds of shows at Holy Diver, shooting many of them, and on this Thursday night, this was the best sounding band I have ever heard here. They were seasoned pros that practically created a sub genre of metal, they seemed excited to be playing a small venue and really took advantage of the opportunity. I think they truly believed that most of the people there were true fans of the band and they gave us exactly what we wanted and needed.