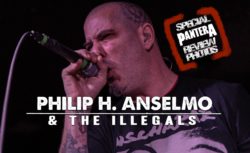 It was the year 2000, Pantera was at the height of their popularity and it also marked the first and only time I got to see them live. They were a force to be reckoned with, a band with so much energy, passion and aggression that no one had seen before them or after them. I distinctly remember Phil’s stage presence and how he had so much command over the audience, something again, I had never seen before, or after.
Flash forward some sixteen years and we’ve seen many iterations of Phil, some good and some bad, and some very bad. A few years ago I saw DOWN and while I’m a huge DOWN fan, I have to be honest that it was the worst I’ve seen Phil on stage, he had put on a good amount of weight, his voice was half gone. I remember thinking, “this is it, this is the end, I won’t put myself through seeing him again until he fixes his shit.”
Flash forward again another two years to 2018.
Philip H. Anselmo & The Illegals playing at a small 150 person club in Sacramento by the name of Holy Diver? Of course I’m going, are you kidding me? And I entered the night thinking the worst, thinking there was NO WAY that we were going to get a great set from him, it was just going to be alright. Boy was I wrong.
The band came on stage and the crowd started to cheer, and then out of nowhere Phil walked on stage, he seemed sober, shaking hands, thanking people genuinely for coming out. This was a side of him I’ve never seen before, this was a humble Phil. And out of all honesty, I never listened to the Illegals album they released, I just started to feel done with Phil after that DOWN show so I have no idea of any of their songs. I’ll say this though – they ripped through what I think was three or four Illegals tracks and while the crowd was amped and ready to party like it was 1999, you could tell what everyone was waiting for, and Phil knew it.
He took a moment and explained to the packed house that this was it, this was the only time this was ever going to happen and that you aren’t ever going to hear Pantera live again. Suddenly, it got insane, and the whole place erupted as they ripped into “Mouth For War.” My senses were overloaded, I felt like I was an 18 year old kid again, even thought I’m 36 now and have a bum knee. I headbanged, had a few beers and enjoyed a revitalized Phil with a band that really did a nice job honoring what those guys did for metal some twenty years ago.
By the end I couldn’t believe they basically played a full set of Pantera songs, songs that really no one has heard live since Pantera, and while no one will ever replace Dime and Vinnie, or the music and energy that those guys pulled together, they will forever be remembered as the band that changed everything in music, the band that made it okay to listen to metal, the band that made some of us feel like we belonged somewhere. I think this was the perfect way for Phil to honor the Abbott brothers, by not speaking too much and just playing the music. It’s a bit of a shame that Rex couldn’t have been on stage with him for this, but it’s still special none the less.