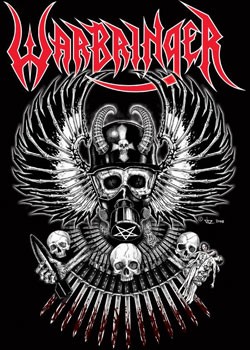 You recently had two members of the band quit, one being a founding member John Laux, do you have any idea what brought it on?

Yes, a variety of things but I would say the main one is the difficulty of making a remotely stable living playing music at anything other than the uppermost levels. We were a reasonably successful mid-level touring band, but it was completely impossible for any of us to own anything/hold down a place any time we came home from tour, after years of this I think people gave up. Right now it is just me and Adam Carroll remaining, for me I just can’t stop playing the music I love regardless of the odds.

Empires Collapse was a fairly big success, what can you attribute that to?

Empires was really an album with contributions from all members, and everyone had a very open mindset with just everyone working with everyone’s songs so it ended up as our most diverse record.

Some people loved it, some hated it, it was simply the album we made though, we put our absolute best into trying to make something really different and interesting, we really wanted to make a record that showed all the stuff the band is capable of.

Unfortunately I don’t think we ever did this record justice in touring or promoting it. Two things happened. First, it was the 4th of a 4 album deal with Century Media, one we were offered to re-sign but could not because of the imminent departure of half the band. I wanted to continue but I cannot in good faith sign a contract without the ability to follow up on my end of it, which I could not as we were’t a full band at that time.

Secondly, we only did two tours for that record, one in the USA with Kreator and Overkill, the other in Europe with Iced Earth and Elm Street. The second tour was done with a fill-in lineup, including Novareign’s Balmore Lemus on guitar and Vektor’s Blake Anderson on drums. Both did a great job but we were just finishing our existing obligations, and could not continue touring the record all year like we should of been.

Century Media has been a great label over the years for bands looking to take that next step, how would you describe the bands relationship with the label?

Very good one, we all got along well personally as well as professionally. As of now our contract is over and we are free agents, though I have been in touch with all the CM people and I think it will be possible to work with them again once things are properly up and running.

No matter who I talk to when it comes to “Road Warriors”, Warbringer always comes up as a band that tours relentlessly, can you explain why that is?

Honestly for this kind of music, you just have to. There’s not gonna be any “overnight sensations” in real, honest metal, not the kind that I wanna hear anyway. The thing is with this kind of music the fans are not “here today gone tomorrow”, if you give them a real fucking metal show with some true fire, they will not forget it easily.

What have been some of your favorite bands to tour with, and why?

When you look at the state of thrash and how huge it has become in the underground world, Warbringer’s name is at the fore-front of that new wave, why do you think that is?

I think it has to do with being one of the first of the “new wave” to get on a label with good exposure and consistently put out albums, the aforementioned relentless touring, and also I think that we have managed to evolve, on each album you hear tighter playing and performance than the last

Do you have any idea what the new material is going to sound like? I know you found a guitar player, any luck on a drummer?

Yes, we have 4/5 members. Ben Mottsman (bass) opted not to join us for the next shows/record. Of previous members it is only me and Adam Carroll.

Hard to say exactly what it will sound like, we are so far just learning the old songs repertoire with the new guys, which is going really well. Gonna have a full lineup figured out by end of December is the hope, and have jams well underway.

I have some plans for the new material, I want it to be really dark, spine-chilling, and relentless. After doing a record that went many different directions, I want to make one that has a frightening singularity of purpose.

Are you on any kind of deadline to get back in the studio?

Nope, we are free agents now and are focusing on getting back on stage with existing material, and once that is accomplished to then focus on writing.

Do you guys drink while on the road or do you try to stay fit and healthy?

If you could give any advice at all to kids getting their new thrash band underway, what would that be?

Practice with a positive mentality and everyone has to push everyone to be better than they were yesterday. The fact is, all the stuff you could say about self promotion etc etc comes secondary to just giving a really fucking good show and playing awesome.

And lastly, what can the world expect from Warbringer in the coming year or two?

By then we should have a 5th album out. It’s been almost a year since a Warbringer tour now, and I hate it. I absolutely must get out there and play metal again. We are going to re forge the band, and you won’t see it until I am confident that we are playing as well or better than we ever have before. There is nothing that can kill us. Not bombs not fire, nor magnets, whose workings still remain unknown.