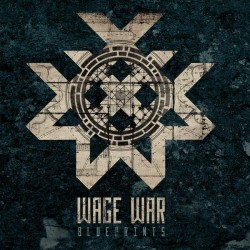 I was first introduced to Wage War just recently when they came through town as part of the Fearless Records Fresh Faces Tour. Its pretty rare for me to experience a band live before ever really hearing their music. In the live setting this band crushed it, they were all sorts of heavy but balanced out with well placed segments of clean singing. After the show I had a brief moment to chat with some of the guys and you could tell they were passionate and pumped for this release, and after this show so was I.

Well the day has now come, their debut album Blueprints is available to the masses. One thing that is certain right from the opening track Hollow is that the crushing heaviness that I witnessed live is still present. Hollow is a perfect opener that sets the tone for whats to come. It rolls seamlessly into the track Twenty One, which was one of the singles released prior to this album. One this track is where we are first introduced to the blend of harsh and clean vocals, the mix of the two really helps round out this track. The album then jumps to the next track, Alive. I say jump as this track carries a groove that will certainly get crowds jumping in a live setting. This is one of the strong points on this album and one of my personal favorites. Its got that crazy heavy groove that hooked me in when I saw them live.

This album carries on, hitting like a sledgehammer on a wall. Crushing everything in its path. At the midway point we find my favorite track off this album, The River. This track is brutal, it’ll get your head banging & your fist pumping. This back half of the album seems to really crank things up a notch. The track Enemy showcases the bands ability to kick up the tempo a bit which is a nice addition. Paired with the ending chorus “What If I should stumble? What if I should fall? What if there is nothing left…, Underneath it all” this is a track I could easily see being a single and part of their live show.

The album wraps up from here with a trio of blistering tracks, Spineless being the first. It’s a short but blistering track coming in at 2 minutes in length but it packs more than enough punch in its short time. Basic Hate is a track seemingly filled with just that, hate. Its vocal aggression is what carries it along. You cant help but want to start a mosh pit right there on the spot when jamming this one. Closing track, Desperate, opens with a anthematic chorus closely followed by what now is there trademark crushing groove, that musical punch in the face that strikes again and again. It provides a great closer for what has been a great album.

Blueprints in no way feels like a debut album, this has a feel of a well oiled seasoned band. Wage War is certain to make waves in the metal scene as this album gets more exposure and the band continues touring. The band is able to capture a true metalcore sound from start to finish, but its a sound that is able to reach beyond the walls of metalcore and reach anyone looking for something heavy and groovy. I thoroughly enjoyed this album and hope to be able to catch this band again as they continue to promote this new album. I’m also excited to see this band continue to grow from here and see what else they could have in store.

- Previous article « My Enemies & I