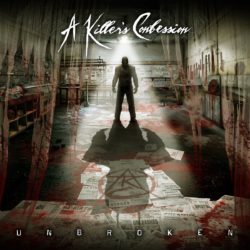 The gloves (… or should I say the masks?) are off and Waylon Reavis and A Killer’s Confession are ready to rumble. It’s been almost 3 years since we’ve really heard any new music from Waylon when he was part of Mushroomhead. That previous arrangement didn’t exactly end on the best terms and left fans wondering what was next. For those unaware, in 2004 Waylon was announced as the new vocalist for Mushroomhead and with time became a fan favorite and face of the band. Becoming one of the strongest and more entertaining front-men in metal. Fast forward a little to 2015 when the band and Waylon abruptly decided to part ways. Many of us were left wondering for the past few years what was next musically for Waylon.

Well, his next chapter is finally here in the form of A Killer’s Confession and their debut release Unbroken. And let me tell you, if you were a fan of Waylon’s more aggressive side in Mushroomhead you will love Unbroken. From the moment the intro track “Awakening” kicks off to the final notes of “Sympathy” this album is a pure adrenaline rush. Those that were worried if Waylon could exist outside the world of Mushroomhead need not worry, his vocals are top-notch and the band sounds tight and plays with a chemistry that you don’t see from bands just making their debut.

Some personal highlights were “1080p” which carries a perfect balance of aggression paired with the harmonies that Waylon was famous for. It’s perfect for stirring crowds into a moshing frenzy. “Final Breath” will get your head banging and fist pumping from start to finish. “L.O.L.” was my personal favorite, being a fan of Waylon’s more aggressive vocal delivery this song was perfection.

Overall, AKC has dropped one hell of a record that provides quite the foundation for them as a band. The band is set to hit the road all summer long in support of Unbreakable with acts such as Non-Point and a returning Union Underground. Once more and more people get to witness and experience A Killer’s Confession this band should take off and be primed for their own headlining gigs. Ladies and gentlemen, you’ve been warned… AKC is here to stay and kick some ass while they are here!

A Killer’s Confession is: