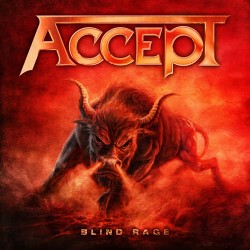 Yup, this is an Accept album, everything we’ve come to know and love about the second coming of Accept over the last decade is most certainly on this album and doesn’t disappoint. Do I think this album even holds a candle to Blood of the Nations? Not a chance, but it’s hard to live up to such an enormous album. Stampede gives us just what we need to open an Accept album, that epic, fast, aggressive riff making that makes you pound your fist to the sky as we hear Mark Tornillo blast our ear drums with his piercing vocals. Yes, oh yes…you’ve just turned on an Accept album. Dying Breed slows us down just enough to remind us that Accept is not just your average classic thrash band – but more-so an early aggressive Power Metal band. This track reminds me of some early Hammerfall songs musically, but where it lacks the mythological creatures and knights in armor, it gains lyrically “saluting” the bands that paved the way.

Dark Side of My Heart is a classic hard rock song that is a sound, solid, good track, but also slightly forgettable smashed in between Dying Breed and Fall of the Empire, a much more traditional Power Metal song that also doesn’t have this level of just a good hard rock song. Fall of the Empire finds me beating my foot to the ground, bobbing my head and screaming with it “Can we learn…or will we burn!?” A fantastic middle of the road, middle of the album track. This leads into Trail of Tears, heavy and fast double bass covered by dueling guitars and aggressively quick vocals, such a great track that reminds us that classic hard rock does have a place in modern metal!

Then into Wanna Be Free, a heartfelt song about atrocity that is human trafficking and how prevalent it still is in parts of the world, however from the standpoint of the music and how it relates to this album, I feel that the song lacks strength and power, and really doesn’t fit musically, and while I appreciate the attempt, I find the skip button far too easy on this song. The good thing is that it goes right into 200 Years, another fast aggressive track that screams classic Accept. Then Bloodbath Mastermind and From the Ashes We Rise, two very good tracks that mold into each other quite well but just don’t seem to hold their own with the first half of the album as much, which lead into The Curse, another track that just doesn’t seem to hold my attention.

But we end on Final Journey, a track that really shouldn’t be lurking at the bottom of this album. It’s aggressive nature and lyrics that don’t make me want to think too hard make me wish it was closer to the beginning of the album.

All in all, I did enjoy this album, but I don’t feel that it holds up against the classic albums, or Blood of the Nations and Stalingrad, which were ultimately very powerful albums and hard to top. But if you’re a Power Metal, Thrash, or a fan of just straight ahead Heavy Metal then I recommend adding this one to your collection. Turn it up, bang your head, and raise your fists to the sky!