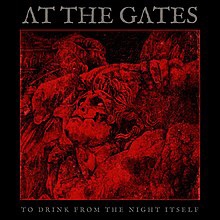 At The Gates – To Drink From The Night Itself

At The Gates – To Drink From The Night Itself May be the best all around album I’ve heard in quite some time. Talk about a follow-up from “At War With Reality”!

From start to finish this album is an all-out assault on your ears. Bruising guitar riffs and drums that remind you that Swedish Thrash is alive and well. And not just thrash, but this album may be the best all around album I’ve heard in a very long time. From start to finish it doesn’t have a single down time track and continues to impress track to track.

If I had any negative thing to say about this I would say that the production value could be a tad bit better, but that’s a true deep dark analysis. This thing is amazing, and the fact that Tomas Lindberg is able to get his voice to sustain is a feet in itself.

A true not to be missed album! So don’t miss it! This album should be a teachable moment for those Mainstream Five Finger Death Punch fans out there!