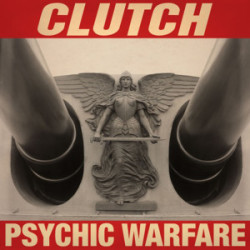 It’s been almost twenty years since I discovered what was then considered stoner rock band CLUTCH. I, of course like most people went through my phases of rock and metal to get where I am now at a fresh, young thirty-three years old, coming to the realization that I purely just love music that moves me in every sense of the word, and also realized that I enjoy heavy music that women can also groove to; let’s face it – it’s all about the ladies as we get older.

After Summer Sound Attack in 2014 I had this sneaky suspicion that CLUTCH was on their way back to the future by returning to the past, and anyone that’s a fan of heavy, groovy rock n roll needs to put their latest ‘Psychic Warfare’ on as loud as it can possibly go and get ready because you’re about to be subjected to one of the best, most diverse rock albums I’ve ever heard.

Let’s take a step back.

Back in October 2015 Loud & Heavy was late to the Aftershock Festival and missed our interview with these old school rockers due to complications in a terrible parking situation. When we finally entered into the massive venue, I certainly grabbed a beer and looked down at my roster and saw that CLUTCH was getting ready to play, so I slammed my beer and ran as fast as I could across the grass to catch this epic band. And LET ME TELL YOU, By no means is Clutch old, these earth rockers opened the stage with a new track “X-Ray Visions” and suddenly I found myself surrounded by dancing women and head banging dudes. So I said to myself, I MUST be in the right place!

When going track by track on this new album, I would love to sit down and say that it has weak points, but those pathetic people out there that would label slower songs as weak points need to realize this is a band built on traditional Bluesy Rock ’N Roll and go pick up an Aerosmith record and hit yourself in the face for never understanding where your crappy new age metal was born from!

‘Psychic Warfare,” dare I say, might be the best Clutch album to date, and that’s hard for me to say, and hard for me to swallow, but it surely has all the balls you can need for both the dancing ladies and the head banging men.